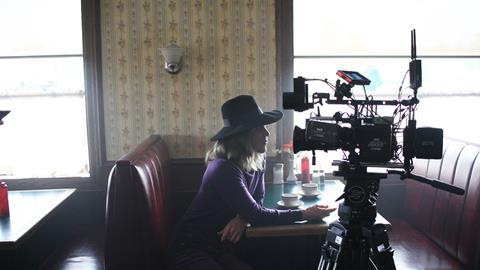 Three years ago, filmmaker Gabriel Range began work on Stardust, a film focusing on the influences and processes that mould an artist. The artist in question happened to be a young singer-songwriter named David Jones. Or David Bowie as he is better known.

A Bowie superfan, Range talks about his personal creative connection, his drive to tell a story about the lesser-known aspects of the once-in-a-generation singer/songwriter and the story of an artist in the making. A love letter from one artist to another, Range explains how he sprinkles his own Stardust on his hero.

Find more information on the film, and access to an exclusive screening room for international distributors at www.stardustscreening.biz.

Tell us about the balance between fiction and reality in the film. Bowie was known to have an obsession with fantasy, are there elements of that present?
We’ve been playful with it. Very little was written about this 1971 trip Bowie made, but there’s a lot of coverage on his consequent launch to stardom and how the trip to America shaped him. The film is very much grounded in fact but we have taken a little bit of licence in terms of how some of elements of the story are handled. A lot of the conversations are imagined and we created composite characters for some of the roles to build an engaging narrative to wrap his world around.

How did the story evolve?
Chris Bell had written a script that was very entertaining, purely based in the US on a series of anecdotes of that American trip. I then worked with Chris to try and develop some of David’s backstory and also to try and give a shape to that journey in America. I also added in some additional backstory to David’s fear of mental illness and the importance of his brother Terry in his life.

Born ten years before David, Terry gave his younger brother a musical education, took him to his first ever gig, bought him his first record. But when Terry had a complete mental breakdown and was sent to an asylum, this spurred a lot of David’s fear that he too could be struck down by schizophrenia, which is very present on The Man Who Sold the World. I thought this lesser-known part of Bowie, his background, his life before that first real flush of fame, was fascinating. And that’s the story I wanted to tell.

Did Johnny Flynn’s real-life experiences as a singer-songwriter fit your vision for the role?
It was much more important to me to find somebody who has charisma and musical talent than it was to find someone with a physical resemblance to David. Johnny could immediately connect with that uncertainty of what it is to step out in front of an audience or to not know how your record is doing, all those insecurities that you feel as a singer-songwriter at that stage in a career.

At the time when the story takes place, David had 16 failed singles but he kept going. Johnny told me that he has many musician friends who have had a brief flash of success and then been told it’s not going to work, pack up, that kind of thing. There’s something hugely inspiring about pushing through it until you find something wholly original in the music, the performance and the persona.

How did you approach the music surrounding the project?
On this sort of non-tour of America, David was not able to perform due to the lack of a work visa. So right off the bat, we knew we were going to be using songs that he was inspired by and performed as part of his tours of the time. Bowie was a huge fan of [Jacques] Brel and other contemporaries like Lou Reed and was heavily influenced by T. Rex. These voices would ultimately coalesce with David’s internal fears and spawn Ziggy and Aladdin Sane and all of his infamous personas and subsequent albums.

What are your own thoughts on the journey Bowie took from the uncertain artist portrayed in Stardust to the shape-shifting musical superstar he became?
David was always this godlike character. Even in his death, it was incredibly choreographed – he put out that incredibly moving final album; he just didn’t feel like a normal human being. There was something so mysterious and enigmatic about him all his life and his professional career. It’s easy to see people like David and think, “God, they’ve always been that way, they’ve always had that success” and to lose sight of what it was like before that. The thing that is so extraordinary about David at this point in his career is how many times he tried and failed and yet he had this incredible determination to keep going.

I wanted to capture that moment of insecurity before the big breakthrough, exploring the young man behind the icon. David is such an inspirational figure to so many artists. Johnny’s performance here is the most wonderful love letter from one musician to another.

Film ConstellationFilm Constellation is a production, finance and sales company headquartered in London. The company builds on a track record for growing award-winning filmmaker brands, working with new and established talent, and fostering strong producer ties across both sides of the Atlantic. Since inception in 2016, the company has packaged, produced and sold over 20 commercially and critically acclaimed films and documentaries, premiering at A class festivals including Cannes, Venice, Toronto, Sundance and Berlin.