The Man From London (A Londoni Ferfi) 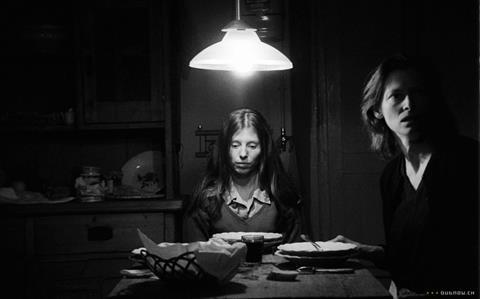 The term ‘film noir’ gets thoroughly redefined in Bela Tarr’s The Man From London, a mystery story cloaked in such stygian darkness that some viewers may succumb to eye strain before its enigmas are unfolded.

But feeling your way through obscurity is the way you have to proceed with Hungarian director Tarr, whose seven-hour Satantango put him on the map as one of European cinema’s authentic visionaries. Based on a Georges Simenon novel, The Man From London bears all the trademarks of Tarr’s recent films: dense chiaroscuro, sparely deployed dialogue, a vividly evoked locale, and fluidly wandering camera movements drawn out over hypnotically extended takes.

Despite a coherent, economical plotline, this film’s sheer slowness may prove too punishing for many viewers, especially given that the film is in a more introspective register than its predecessor Werckmeister Harmonies (2000). The Man From London may not offer that film’s sense of other-worldly revelation, either, but Tarr’s increasing camp of hardcore admirers, especially on the festival circuit, will be certain to go the distance and appreciate a film that is a refinement and consolidation rather than a major advance.

However, the film’s uncompromising aesthetic will deter all but the most determined arthouse buyers, while the rigorously fine-tuned use of black and white may make the film hard to sell on DVD, except to owners of top-notch plasma screens.

Shot in Bastia, Corsica, the film is largely filtered through the consciousness of Maloin (Krobot), a middle-aged man who works nights in a signal cabin controlling a dockside railway. One night, he witnesses a set of strange events following the docking of a ship: a man throws a suitcase onto the quay, which eventually ends up in the water, along with a corpse. Maloin retrieves the case, which contains a fortune in English banknotes, then goes home for an uneasy meal with his wife (Swinton) and daughter Henriette (Bok). Meanwhile, a shady figure (Derszi) is seen hovering round town. He turns out to be Brown, an Englishman who has robbed his employer and who is now being watched closely by Morrison (Lenart), a police inspector.

While the film is perfectly coherent as narrative, you sense that Tarr and co-writer Laszlo Krasznahorkai - whose novels have been the sources of Tarr’s recent films - have pared Simenon’s book to the barest bones to transform it into a vehicle for the exploration of space, time and sardonically implied existential questions. The action takes place in a limited number of settings - mainly the dockside, Maloin’s flat and the local bar - which the drifting camera explores so minutely that we end up feeling we know every corner of this enclosed world. The shooting style will test the patience of casual viewers, but once you give into its hypnotic intensity, the effect is galvanising: it puts you into a state of heightened attention in which no detail is insignificant, no movement lost.

German cinematographer Fred Kelemen - whose own films as director, such as Fallen, are in a similar mode - has achieved a tour de force of camerawork, not only in the textures of light (moving in a single take through glaring sun, inky obscurity and misty grey haze), but also in the painstakingly choreographed movements, which give the film the edge of a forensic investigation.

The acting is far from naturalistic, with Tarr casting partly for physical presence: apart from a couple of alarming displays of rage, the scowling, weatherbeaten Kropot is largely silent, a brooding, lumbering golem of a man. Tilda Swinton, visibly dubbed into Hungarian and present in only two scenes, fits instantly into Tarr’s universe with her gaunt, haunted features, and while the voice may not be hers, she’s a striking force in her arguments with Maloin.

Dialogue, however, is used largely as one instrument in the film’s sound palette: Lenart’s ancient policeman, who has something of Max Von Sydow’s baleful gravity, intones his lines slowly in broken phrases, giving his character an ominous God-like quality. When the characters burst into heated arguments, or when two shop assistants jabber in frenzied chorus, they then lapse into silence, to startling effect. Elsewhere, the sound of clocks, the sea, footsteps and bar-room accordion - adding an extra dash of Simenon flavour - make up a haunting, frugal backdrop.