Tom McCarthy: in the 'Spotlight'

Screen spoke to Spotlight director Tom McCarthy about the challenges of piecing together a serious and starry investigative journalism drama. 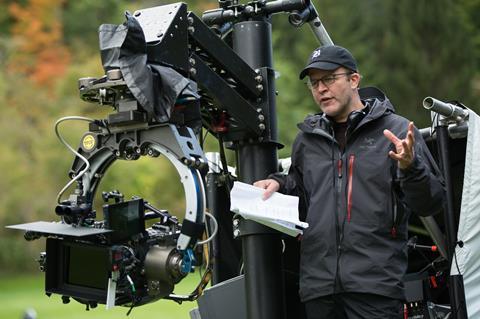 Growing up an Irish Catholic in New Jersey and later attending Boston College, Spotlight writer-director Tom McCarthy was one of many who suspected impropriety in the region’s Catholic Church.

“We heard whispers growing up,” the Oscar-nominated writer told Screen ahead of the film’s world premiere in Venice last night (Sept 3).

Actor-writer-director McCarthy’s upbringing helped contextualise the true story of how in 2002 the Boston Globe’s investigative reporting unit uncovered the massive scandal of child molestation and concealment within the local Catholic Archdiocese, shaking the entire Catholic Church to its core.

“I felt an instant connection with the material”, says the Win Win and The Visitor director who used to play softball and soccer on the property belonging to Cardinal Law, the former Archbishop of Boston who was implicated in the Church’s cover up of sexual abuse and is a key character in McCarthy’s film.

The Globe’s reporting - which earned it a Pulitzer Prize - thrust the issue of sexual abuse of minors by Catholic priests into the national limelight and led to a number of sentences, settlements and resignations.

“It really was the Spotlight team that blew the doors open on the scandal,” he recognises.

Evil on a grand scale

And this was a scandal that implicated many.

“This was evil on a grand scale,” says the filmmaker. “This was institutional level complicity and deference on a societal level.”

However, McCarthy is keen to stress that the shocking story should not tarnish the good work the Church is also capable of.

“Part of the reason I wanted to tell the story is because I also think the Catholic Church does a lot of good. My family is a Catholic family and I have some good friends who are priests.

The issues raised by Spotlight have personal resonance for the director, but they also chime with more recent corruption scandals about other large institutions.

At the same time, the gripping Spotlight is as much a call to arms to support the publishing industry as it is a celebration of the Globe’s heralded investigative department.

McCarthy got to know the media world up close when he played Scott Templeton, a hungry reporter who lets ambition get the better of him, in season five of The Wire.

“I’m a big a fan of good journalism, which has been decimated in the US,” laments McCarthy, whose acting credits also include the great Good Night, And Good Luck and TV series Boston Public.

“That is very frightening to me. I don’t think the general public has an understanding of the scope of this decimation but it was something I became very acutely aware of during my season on The Wire.”

“By the time we got together before rehearsal all the actors had reached out and talked to the reporters or editors they were playing,” explains McCarthy.

“I was very impressed. Mark Ruffalo was tailing a big case with Rezendes [Spotlight reporter Mike Rezendes], even filming him. Rachel was doing the same. And sitting through a ton of interviews.

“Michael Keaton was hanging out with Robby Robinson [Spotlight editor Walter ‘Robby’ Robinson] and following a case while it was unfolding.”

However, sustaining the tension in such a dialogue-heavy film was always going to be a challenge.

“The most difficult part was gathering all the information, keeping the ensemble active and maintaining the emotional level,” says the director.

Working closely with the acclaimed investigative reporting team and top newspaper editors helped. The production never lacked for an informed second opinion or strong voice from those who were actually there.

“We had four reporters and two editors including Marty Baron [Washington Post editor Martin Baron, then editor of the Boston Globe] - who doesn’t mince words - constantly reading drafts and coming back to us.

“Two weeks before shoot co-writer Josh Singer [The West Wing] and I locked ourselves in the Boston Globe’s editor’s room with Robbie and Rezendez.

“We went through the script line by line. It became a six-seven hour meeting. After that we thought we were in a good place. It had been a two and half-year script development.”

The sensitivity of the material meant that the script development - and even the shoot itself - was still a legal minefield.

“There was a lot of vetting throughout and straight through,” says the director. “We were passed a lot of legal notes”

The reaction from the Spotlight journalists to the final film was inevitably analytical and forensic.

“I took it to them to see it in Boston - I hadn’t done that with a film before,” explains McCarthy. “Ultimately they are happy. The initial reaction was a bit of a frying pan to the face, however.

“When the lights went up there was a long quiet then we sat there for an hour and a half. Later that night we started getting long emails from them. most of them positive”, he laughs.

“It was like getting the newspapers to read the first reviews of a show or movie you have made.”

McCarthy has made an enthralling and serious film, one whose messages are as pertinent and resonant today as ever.

“Practical logic tells me this is part of the culture,” he concludes about whether abuses are ongoing. “It doesn’t just stop”.

Bernard Francis Law is now a cardinal priest in Rome, one of the film’s postscripts reports. The irony was not lost on the audience that yesterday watched Spotlight’s world premiere in Italy, to many the Catholic Church’s spiritual home.