Under The Bombs (Sous Les Bombes) 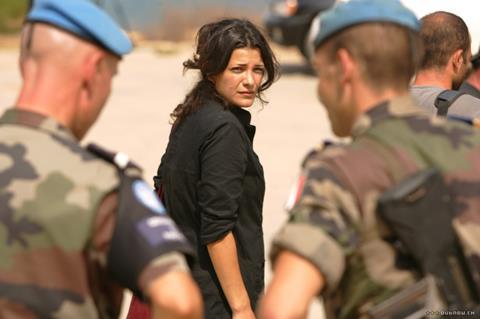 Philippe Aractingi’s Under The Bombs was made in Lebanon in the immediate aftermath of the war last year. Aractingi was living in Beirut during the Israeli attacks on the city and filmed some footage at the height of the conflict. He then secured financing that enabled him to carry on production immediately after the ceasefire. This may have been a project conceived in chaotic circumstances and shot on the hoof, but it is deftly scripted, boasts two fine central performances and is far more than a piece of reportage dressed up in dramatic clothing.

“The ending is moving and unexpected”

Received with enthusiasm at its premiere in Venice, Under The Bombs has already sold to certain key territories. (For example, Fandango has taken Italian rights while Artificial Eye will be releasing the film theatrically in the UK.) Its continuing festival exposure at the Dubai film festival this month and in Sundance in January ought to help Paris-based sales agents Memento to secure further deals.

As the Italian neo-realists showed in films like Rome, Open City and Berlin, Year Zero, there is something intensely photogenic about bombed-out cities. The imagery here of bridges broken in half, houses reduced to rubble and crater-filled roads that have become impossible to pass could never have been contrived by a production designer. Nor could a film-maker trying to reconstruct the war in another time and place have come close to the authenticity that Aractingi achieves here by training his camera on real-life UN soldiers or shooting sequences with Lebanese citizens still clearly traumatised by what they have just experienced. What is most impressive about Aractingi’s approach is not its shock tactics or its voyeuristic fascination with war, but its subtle and often lyrical observation.

The film begins in shuddering fashion with footage of bombs landing on Beirut and of women and children racing for cover. The central character is Zeina (Nada Abou Farhat), a young mother who has been living in Dubai. She returns to Beirut in search of her young son, who has been living with her sister. She hopes and prays that she will find him safe in the south of the country. Toni is the taxi driver who reluctantly (and for a generous price) agrees to take her on a quest to find her son. Zeina is Shiite. Toni is Christian. Driver and passenger have little in common and, at first, seem to dislike each other. However, as their journey continues, a strong rapport builds up between them.

At first, they search for the son in the schools and refugee centres. Then, they head south. On one level, the film follows a conventional narrative arc. This is a road movie about two characters who are brought together by their shared grief. Nada Abou Farhat captures brilliantly both the mother’s sense of desperation and her dignity.

Just occasionally, the dialogue risks becoming stilted. However, Aractingi avoids some of the more obvious cliches. For example, he doesn’t show dead bodies. Nor does he uses the film as a soapbox for sermonising. His intention is to focus intently on his two main protagonists and to show just how they are affected by the devastation around them. The film often wrong foots us.

There are incongruous moments of humour (the taxi driver singing Sur Le Pont D’Avignon when he comes across a bridge that has been shattered.) The scenes inside the taxi - in which the camera is trained on the two protagonists’ faces - are juxtaposed with sequences showing beautiful, unspoiled landscapes. The ending is moving and unexpected.

Under The Bombs is not overtly political. We hear little railing against the Israelis or the West. Nor does the film proselytise on behalf of Hezbollah. Instead, it offers a closely focused account of a single bereaved woman. Her experiences show in microcosm what an entire society is undergoing as a result of a war which few would disagree now should never have been allowed to happen.