Vita & Virginia centres on the love affair between writers Virginia Woolf and Vita Sackville-West. Screen reports from the Dublin set, where iconic English locations have been brought to life. 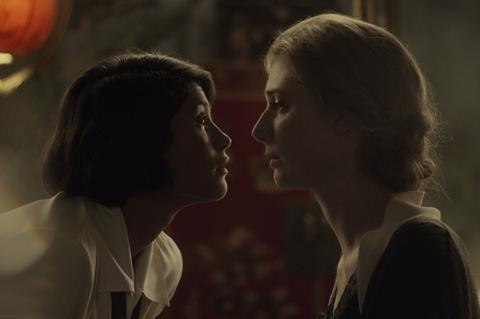 In a quiet corner of suburban Dublin, the Bloomsbury group is bringing art to life. Paintings and drawings are dotted throughout Baldonnell House, one of several Irish locations hosting the production of a new film about literary icon Virginia Woolf.

For Arterton, who is an executive producer on the film — based on Eileen Atkins’ 1993 stage play — the story is one she has long aspired to bring to screen. “Eileen Atkins sent me a very early draft, maybe four or five years ago. I ended up showing Chanya the script on holiday.”

While many accounts of Woolf turn towards her troubled later years, this film shows her at her most vibrant, according to Arterton. “She wrote such vivid stories, full of inspiration and energy and creativity and humour and wit,” she says. “I don’t know if we’ve seen that side, because the fascination with her is always the end of her life, which is sad, I think. They were only lovers for a small period of time, but they were great friends.”

This is the actress’s second time in a producer role. “I produced a film which has yet to come out called The Escape,” she says. “My involvement comes more creatively — script stage, crew stage, getting directors and the cast in place. I was very involved in that, and various drafts of the script. Because Chanya is a friend of mine, it was very collaborative with her in terms of visual style, what we felt about this story.”

Kioussis started developing the script at Mirror, whose other recent projects include Crash Burn Love, with Atkins in 2012, after meeting her through a mutual acquaintance and reading her first-draft screenplay. It was inspired by her play of the same name, which was staged in an acclaimed production in New York in 1994 that featured Vanessa Redgrave as Vita and Atkins as Virginia.

Kioussis attached Dutch director Sacha Polak (Hemel, Zurich) in 2014 and added Romola Garai as Virginia alongside Arterton as Vita. He then approached Blinder’s Holly, whose recent credits include Whit Stillman’s Love & Friendship and Sophie Fiennes’ Grace Jones: Bloodlight And Bami, to board as producer in early 2016. When Polak exited the project shortly after, Kioussis met Button through Arterton. Button came on board to co-write the final shooting script with Atkins and direct the picture. Eva Green was briefly attached to replace Garai as Virginia, but was forced to drop out due to a scheduling conflict; Debicki joined the project for its autumn 2017 production in Dublin.

Locations across Dublin double for the UK in the film, although a day was spent shooting on location in England at Knole House, Kent, which features in the novel Orlando. Ireland has stood in for the UK on several recent productions, including Love & Friendship. “We’re delivering on something that feels a lot bigger than what we’re making it for,” says Holly.

“A friend suggested Ireland as being more Georgian than London, as far as the architecture goes,” adds Kioussis. “It was a place I really wanted to come and do the film. We have such a variety of locations and they’re very period-specific and they’re based on real places, so we wanted to be authentic and true.” He adds that Button’s in-depth knowledge of Woolf and the period was extremely useful in that regard.

“If we can be relied upon to know anything about Virginia Woolf, it’s how she passed away,” says Button. “For someone we have historically associated with fragility, the story we get to explore in this film is a moment of profound strength.

“Her relationship with Vita is the story of her connecting with her body, and her sexuality,” adds the filmmaker, “and it’s a kind of alternative look at an artist-and-muse relationship. It’s the story of the creation of Orlando, but it’s also the story of Virginia using her profound genius to overcome an experience that we might presume, on the face of it, would overwhelm her. That’s what interests me, the opportunity to look at this really iconic writer in a very different way.”