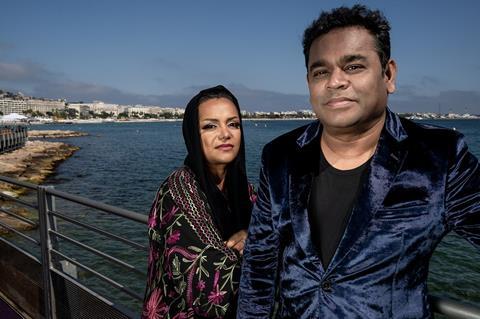 Nayla Al Khaja, one of the UAE’s first female filmmakers, has raised the funding from private individuals for her debut feature project Baab, which has Oscar-winning AR Rahman on board as composer. It is co-written with writer and editor Masoud Amralla Al Ali.

Finding the budget this way, she says, has allowed her to sidestep gender imbalances prevalent in the financing world.

“What I did was to take the power, and to do so I raised the money myself. I took off my director’s hat and put on a producer’s one,” Al Khaja says. “This way, I can choose my sales company, I work with excellent producers, and do what I want to do.”

Al Khaja made a well-crafted short illustrating the full Baab feature before starting to think about raising finance. Once complete, she “rented a theatre back home, invited wealthy people, packed the hall so it looked vibrant and screened it,” she explains.

“Within 24 hours I had raised the first $1million following a standing ovation,” Al Khaja says. “I cried that night out of joy, tears of joy,” she added, saying she felt “blessed” by her investors who “do not interfere, they give me creative freedom.”

The thriller tells the story of a woman and  how she becomes increasingly obsessed by her twin sister’s mysterious death after the discovery of some cassette tapes cause the past to come back and haunt her.

“My aim is to get the audience to experience the film viscerally, to get their skin to crawl at moments, to have them hold their breath at others, and be in awe of the music,” she said. “It’s a journey they have never on, as I put the Arab woman in a context we have never seen before.”

Baab is being produced by Elly Senger-Weiss and Sultan Al Darmaki, with Muna Easa Al Gurg set to executive produce.

As Al Khaja points out, gender representation in film schools globally tends to be perfectly balanced between women and men, in professional spheres financial dynamics kick in and “something goes wrong. If you go back and find out what’s happening, it’s literally a boys’ club with men signing all the cheques. The minute the budgets are higher, the number of females diminish,” Al Khaja said. “That’s why you get a lot of women doing documentaries as they are cheaper to make. When the budgets are higher, women don’t have the same fighting power to access these circles.”

Even so, Al Khaja said gender imbalances in the film industry in the Middle East were minimal.

“Because we started late in the Middle East with film, the balance between men and woman is roughly the same, and we have the same challenges,” Al Khaja said. “So there are no real diversity issues, and instead what we have are new industry challenges.”