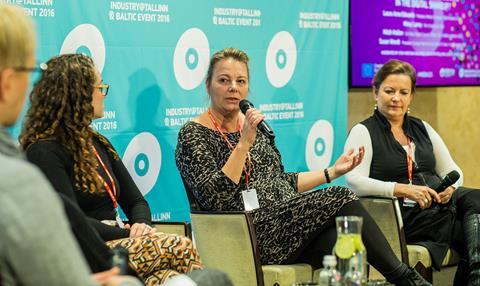 Opening up the sales and marketing windows rather than just wanting to break them, was one of the key conclusions of the opening session of the second European Film Forum (EFF).

“It’s a question of learning the opportunities from the windows,” Susan Wendt, head of sales at Denmark’s Trust Nordisk, observed at the forum, held on Monday Nov 21 in Tallinn.

US film strategist Missy Laney, who previously worked for the Sundance Institute and BitTorrent, supported the concept of windows, but pointed out that “the old rules no longer apply” where a film might have made its passage through a festival career to theatrical release and then on to transactional [VoD], and so on.

Susan Wendt, on the panel as president of the sales agents’ trade association Europa International, explained that there is a need for an individual strategy from film to film, although admitted that this process is much slower in Europe than in the US.

There were, however, mixed signals from the speakers about whether one could actually identify a specific audience for a film.

Producer and media strategist Laura Anne Edwards suggested that “we have never had a generation of filmmakers who know their audience as well as the filmmakers today”, while Laney recalled a surprise discovery about audiences when launching the Discovery Fund at BitTorrent.

“You may think that your audience is made up of young teenage boys on BitTorrent but, in reality, they are women over 45,” she said.

“Every film is different, that’s the surprise. Each platform doesn’t only cater to one audience.”

Susan Wendt added that the role of curation was to “ensure that a film is not disappearing on a platform. One of the problems, especially in Europe, is that the platforms are not structured in an easy and approachable way.”

At the same time, Laura Anne Edwards expressed herself “gobsmacked” by the fact there isn’t any foreign category on the Netflix platform for subscribers interested in seeing the best of foreign language films.

The appearance of such major players as Netflix and Amazon in the market and the question of whether they pose a threat or an opportunity reminded Mallon of the video market in the 1980s, when the Blockbuster video chain came to the US and this new competition resulted in existing retailers responding to the new competition with their own new strategies.

In an opening keynote to an audience of around 40 professionals on Monday morning, Lucia Recalde, Head of the Audiovisual Industry and MEDIA Programme unit at the European Commission, looked back at the “main lessons” learnt from the series of European Film Forums held at key festivals throughout Europe since the Berlinale in February 2015.

According to Recalde, there have been five “main takeaways” from the dialogue with the professionals in the European audiovisual industry.

She said that the discussion forums showed that there is a need to invest in people and nurture the next generation of professionals; and that there was need to develop the connections between technology and creativity to promote more innovation in formats for content.

Recalde pointed out that much of the debate last year had focused on the access to content across the borders in Europe and beyond Europe. While she reiterated the importance of the territoriality principle for the financing of content, she suggested that one should look for new distribution strategies and devise personalised, tailor-made strategies for content.

In addition, she said that collaboration along the value chain from pre-production onwards was needed in order to better promote European works as well as devoting more energy to enhancing their findability and prominence on the new platforms; and the Commission would now be looking at ways of developing new public-private financing models in concert with the guarantee facility for the cultural and creative sectors.