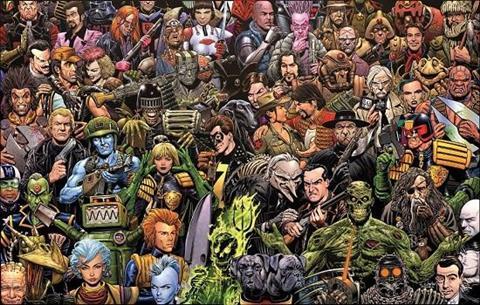 First published by IPC in 1977, 2000AD - a weekly comic, in the then-commonplace British format featuring a variety of continuing strips rather than concentrating on a single character or storyline - was intended to ride the wave of interest in science fiction aimed at boys that followed the success of Star Wars.

Future Shock! draws on interviews with a vast range of creatives who have worked on the title over the decades and a number of others (writer Lauren Beukes, filmmaker Nacho Vigalondo, musician Scott Ian) who have been inspired by the comic.

Its then-futuristic title signaled an assumption that it was highly unlikely to last until 1984, let alone the new millennium. Yet it has survived several publishers, outlasting an entire British comics industry, and is presently enjoying one of the most artistically fruitful periods in its run.

Pat Mills, the freelance editor and writer IPC had commissioned to create the new comic, was coming off the controversial and discontinued Action, which had been criticised for its ultra-violence (artist Kevin O’Neill notes that in comics ‘action’ is a polite way of saying ‘violence’) and an incipient punk sensibility.

Mills, very much the spine of this story, put his own stamp on 2000AD and - along with writers John Wagner, Alan Grant and Alan Moore and artists Brian Bolland, Carlos Ezquerra and Mike McMahon - turned it into a science fiction showcase closer in tone to Alien, Blade Runner and Mad Max 2 than the outer space swashbuckling heroics of George Lucas’s world.

Future Shock! draws on interviews with a vast range of creatives who have worked on the title over the decades and a number of others (writer Lauren Beukes, filmmaker Nacho Vigalondo, musician Scott Ian) who have been inspired by the comic.  A few are absent - notably Alan Moore and Mike McMahon - but this isn’t simply a celebration of a golden age.

Artists and writers talk about the camaraderie and enjoyment of subversive opportunities, but also the missteps and clashes with management over then-prevailing working conditions in British comics, which didn’t deign to credit them until O’Neill, whose first job in the industry was tip-exing out artists’ signatures, included a ‘credit card’ revealing who had written and drawn the strips.

The influence of 2000AD on American comics is covered in a section on the brain drain whereby British creatives (Neil Gaiman, Grant Morrison, Bolland, Moore) would start out working on the comic, then get headhunted by DC or Marvel.

Also covered are the Judge Dredd films starring Sylvester Stallone and Karl Urban, some extreme (and quite amusing) friction between Mills and a subsequent regime he refers to as ‘the dark ages’, the overwhelming maleness of the comic (Moore’s Ballad of Halo Jones aside) and the way its vision have percolated into other media.  A lot of artwork is shown, some given life by animated tweaking, and Justin Greaves contributes a punk-inflected score that roots the once-future year 2000 to the sounds of 1977.