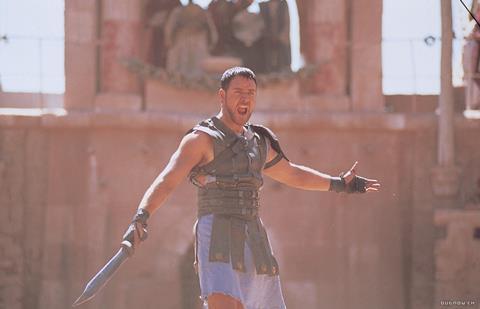 It’s many years since anyone tried a Roman epic on contemporary audiences, and it is at least arguable that British director Ridley Scott was the one to do it. He has the visual sense, the taste for spectacle and a praiseworthy determination not to let his characters be swallowed up by the logistics of a huge and difficult production. That said, Gladiator reminds one as much of Braveheart as it does of Spartacus or Ben Hur. If it appeals to roughly the same audience, its gamble will pay off.

History it is not. But Scott does attempt to sketch in, as luxuriantly as possible, an Empire of enormous power and achievement but also shot through with corruption and brutality. We see Maximus (Russell Crowe), a simple and honourable soldier, crucified by the politics of the time and seeking revenge the only way he knows how ’ by meeting might with might in gladatorial combat. Favoured by the Emperor Marcus Aurelius (Richard Harris) to succeed him, he survives attempted murder by the Emperor’s son Commodus (Joaquin Phoenix), and becomes the best gladiator of his era using the popularity that gives him to wreak revenge.

Opening with a splendidly imagined battle between the Roman army commanded by our hero and Germanic hordes ’ a set-piece that is as good as anything else in the picture, the film progresses to depictions of gladatorial combat that emphasise the crowd’s baying ferocity as well as the violence in the pit. Meanwhile its story and characters are filled out with at least a modicum of skill, even though we are not always sure that a good cast is actually at full stretch as actors.

What one can say is that Crowe makes a believable Maximus even if he is not quite Kirk Douglas or Mel Gibson. And that Joaquin Phoenix is a villain who is a little more than one-dimensional. This may be fundamentally Saturday night entertainment, but Scott attempts rather more than that on occasion, and at least succeeds in creating a memorable sense of a dark and often frightening period of time.