Update: Donald Trump has responded to Streeps comments, calling her “one of the most over-rated actresses in Hollywood”. 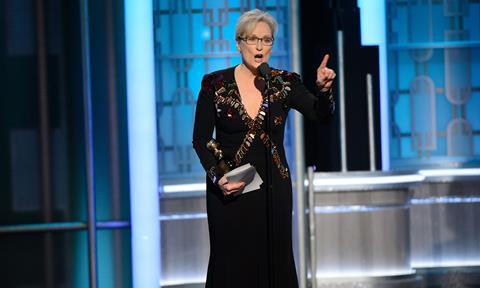 Meryl Streep delivered the emotional highlight of the night in a rousing address on the eve of the Donald Trump presidency that hailed diversity and called for protection of the free press.

On stage to receive the Cecil B DeMille Award – Hollywood Foreign Press Association’s honour for outstanding contribution to entertainment – Streep did not waste the occasion.

She saluted the diversity on offer among the night’s acting talent, adding: “Hollywood is crawling with foreigners and if you kick them all out you’ll have nothing to watch but football and Mixed Martial Arts.”

Streep fought back tears when she referred to the notorious occasion when president-elect Trump appeared to ridicule Serge Kovaleski, a New York Times reporter with disability.

Beset by a hoarse voice and taking frequent pauses to gather herself, she said the incident broke her heart.

“This instinct to humiliate, when it’s modelled by someone in the public platform, by someone powerful, it filters down into everybody’s life, because it kind of gives permission for other people to do the same thing.

“Disrespect invites disrespect. Violence incites violence. And when the powerful use their position to bully others we all lose.

“This brings me to the press. We need the principled press to hold power to account, to call him on the carpet for every outrage. That’s why our founders enshrined the press and its freedoms in the Constitution.”

Streep ended on a hopeful note. “As my friend the dear, departed Princess Leia said, ‘Take your broken heart, make it into art.’”

Donald Trump responded to Streep’s comments in a interview with the New York Times.

He dismissed Streep as a “Hilary lover” and said he was “not surprised” that he had come under attack from “liberal movie people”.

The President-Elect, who will be inaugurated on January 20, said he had not watched her remarks.

He later added over a series of tweets: “Meryl Streep, one of the most over-rated actresses in Hollywood, doesn’t know me but attacked last night at the Golden Globes. She is a Hillary flunky who lost big. For the 100th time, I never “mocked” a disabled reporter (would never do that) but simply showed him “groveling” when he totally changed a 16 year old story that he had written in order to make me look bad. Just more very dishonest media!”

“She has never been more graceful than tonight, nearly w/out voice, her voice has never been so strong,” wrote Sharon Stone on Twitter. “TY Meryl Streep. #GoldenGlobes.”

Julianne Moore wrote: “When the powerful use their position to bully others, we all lose” thank you #MerylStreep #GoldenGlobes.”

James Woods wrote: “I started my career working with #MerylStreep. That experience set a standard to which I always aspired. A national treasure and fine woman.”

“There has never been anyone like Meryl Streep,” Ellen DeGeneres wrote on Twitter. “I love her. #GoldenGlobes”