The Revenant and The Martian shared top honours at the 2016 Golden Globe Awards for drama and musical or comedy respectively as the former also earned best director and dramatic actor and the latter best actor in a musical or comedy. 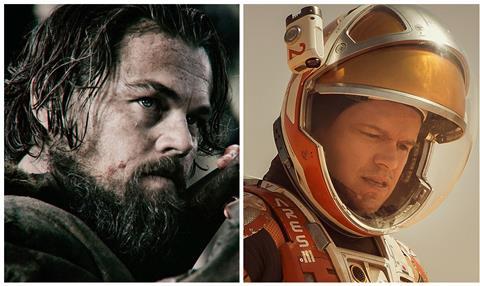 Todd Haynes’ Carol headed into the ceremony at the Beverly Hilton on Sunday evening with the highest number of nominations - five - and left empty-handed. Similarly The Big Short, nominated for four, failed to translate a single nod into a trophy at the Hollywood Foreign Press Association’s annual shindig.

Away from the business of winning awards, arguably the most anticipated part of the evening was the inevitable encounter between show host Ricky Gervais and Mel Gibson, making his return to the limelight after years in the wilderness following a series of anti-Semitic and misogynistic remarks and erratic behaviour.

Introducing the Australian, whom he roasted while emceeing the show several years ago, Gervais, tongue firmly in his cheek, referred to previous bad blood between the pair. “I’m sure it’s embarrassing for both of us and I blame NBC for this terrible situation.”

Gibson took to the stage to introduce footage from Mad Max: Fury Road and the men hugged. Gibson said: “I love seeing Ricky once every three years because it reminds me to get a colonoscopy.”

A subsequent exchange was bleeped out but, according to reports, Gervais asked Gibson: “What the fuck does sugar tits even mean?” in reference to a phrase Gibson is on record using to address a female police officer after he was pulled over for a DUI in 2006.

Big wins for The Revenant, The Martian

The night ended when Harrison Ford presented Alejandro G Iñárritu with the best dramatic film award for The Revenant. The filmmaker collected the best director award earlier in the show.

The Martian was named best musical or comedy. Ridley Scott accepted the award and said “Screw you” as music began to play while he thanked a long list of collaborators.

Scott rounded off by saying: “Finally, I know my [late] brother Tony would have been here tonight for sure and I know many of you knew him and loved him. I love you, Tony.”

Earlier in the show, Iñárritu said he was “seeing god” as he accepted the best director prize from Morgan Freeman. In his acceptance speech he cited lead man Leonardo DiCaprio and said, “The best experience of my life.”

Brie Larson won best actress in a drama for Room – her first Golden Globe win in what is expected to be a rehearsal for the Oscar ceremony in February.

The corresponding dramatic actor prize went to DiCaprio for The Revenant. This is the actor’s third Golden Globe win after the dramatic prize for The Aviator in 2005 and comedy or musical honours for The Wolf Of Wall Street in 2014.

He has been nominated four times for the Oscar but never won. Many believe this will be his year.

Addressing the Native American element of the story in The Revenant, DiCaprio said: “It is time we recognise your history and we protect your indigenous lands from corporate interests and people out there to exploit them.”

Damon last won a Globe in 1998 for writing the screenplay for Good Will Hunting with his good friend Ben Affleck.

Sylvester Stallone earned a standing ovation when he took to the stage to accept best supporting actor for Creed and said. “I want to thank my imaginary friend Rocky Balboa for being the best friend I ever had.”

However, he forgot to thank Creed director Ryan Coogler and star Michael B Jordan. Show guests tweeted that he returned to the stage during the commercials to make amends.

Ennio Morricone has won the best score Golden Globe for The Hateful Eight. Quentin Tarantino accepted the award for the composer and noted this was the first award Morricone had ever won in the US for a score.

Writing’s On The Wall from Spectre (music and lyrics by Sam Smith and Jimmy Napes) won best song.

Lady Gaga won best performance by an actress in a limited series or motion picture made for television for American Horror Story: Hotel.

Denzel Washington brought the Beverly Hilton audience to their feet as he accepted the Cecil B DeMille Award for career achievement.

The winners appear below in bold.

Best Performance By An Actress In A Motion Picture – Drama

Best Performance By An Actor In A Motion Picture – Drama

“Love Me Like You Do” — Fifty Shades Of Grey
Music/Lyrics by: Max Martin, Savan Kotecha, Ali Payami, Ilya Salmanzadeh

Best Performance By An Actress In A Television Series – Drama

Best Performance By An Actor In A Television Series – Drama

Mozart In The Jungle, Amazon Studios

Best Television Limited Series Or Motion Picture Made For Television

Oscar Isaac, Show Me A Hero

Best Performance By An Actress In A Supporting Role In A Series, Limited Series Or Motion Picture Made For Television

Best Performance By An Actor In A Supporting Role In A Series, Limited Series Or Motion Picture Made For Television