Guardians rises to the top of the UK box office 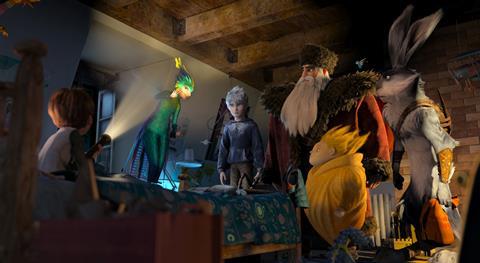 In the calm before the Hobbit storm, Rise of the Guardians posted a sturdy hold to climb to the top of the UK box office in its second week.

Paramount’s 3D animation added $2.6m (£1.6m) from its 497 sites to record only a 19% week-on-week drop. After ten days in play, Rise of the Guardians stands at a solid $6.5m (£4.1m) but, like the rest of the market, is likely to suffer this weekend with the arrival of The Hobbit: An Unexpected Journey.

A potential boost for Peter Ramsey’s animation could come, however, when schools break up for the festive season.

Following its record-breaking week last week which saw it overtake Avatar to become the biggest film of all time in the UK, Skyfall now has its sights set on the £100m barrier.

The week’s highest new entry came in the form of Momentum’s Seven Psychopaths.

Artificial Eye’s well-received I, Anna debuted with $29,000 (£17,844), including previews, from its limited ten screen opening.

This week sees saturation releases for Warner Bros.’ much-anticipated The Hobbit: An Unexpected Journey and Disney’s Tinker Bell: The Secret of the Wings. Fox’s awards contender Life of Pi receives a West End release before its nationwide release on Dec 20, while Sony’s Smashed, Dogwoof’s Oscar shortlisted Chasing Ice and StudioCanal’s Code Name: Geronimo are among the films receiving a limited release.