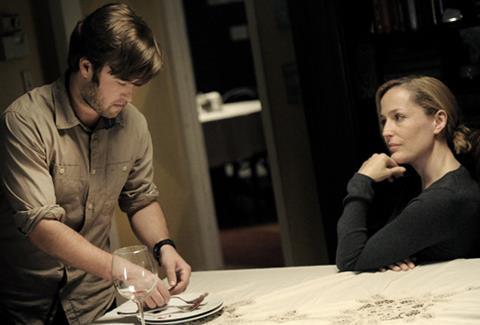 Ritchie Mehta’s impressively thoughtful time-travel drama I’ll Follow You Down has the cast and class to deserve formal distribution. It has featured in several film festivals – from Fantasia to the Miami International Film Festival – and while perhaps a little too low-key for its own good, its combination of time travel paradoxes, family traumas and ruminations on the nature of love make it a watchable film.

Once audiences get past the sight of a grown-up Haley Joel Osment (the child star of The Sixth Sense and A.I.) playing the key lead role (stubble and a hairy chest) – and he is pretty good – and focuses on the heartache and trauma that drive the film it proves to be a satisfying experience.

The film opens in happily families style as father Gabriel (Rufus Sewell) plays chess with his young son Erol. With his mother Marika (Gillian Anderson) young Erol takes Gabriel to Toronto airport as he heads off on a business trip to Princeton. But he never returns, vanishing without a trace.

Cut forward 12 years later and Marika cannot get past the loss of her husband. The grown-up Erol is living with his childhood sweetheart, and while a brilliant physicist is quite directionless. He is thrown into a quandary when his scientist grandfather Sal (the excellent Victor Garber) tells he thinks Gabriel invented a time machine. Erol finds himself torn by the possibility of helping Sal find a way to go back in time to save his father, aware that anything they do may have serious implications on the life they live now.

Haley Joel Osment still has the sense of intense intelligence that defined his roles as a youngster and has smarts to carry the film. Victor Garber provides terrific support, while Gillian Anderson is striking and memorable as a melancholic woman brought down by a very physical sense of loss. Rufus Sewell – in virtually a cameo role – rounds out the strong cast as a brilliant man driven by a chance to make a scientific difference.

It takes until the third act for the film to really revel in time travel paradoxes as Erol has to try and work out how to use the time machine they create. It leads to some powerful moments of drama that have real sense of emotional resonance. It is not a film driven by special effects….but by heart and soul.