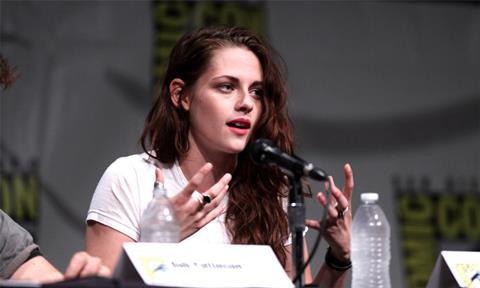 Josh Kaye stars in the film, which shot mostly in Los Angeles and for two days in Arizona last summer and is described on the Sundance website as “a diptych of one man’s day, half impressionist and half realist portraits.”

Scott Free and Starlight Studios produced Come Swim and Refinery 29 financed the project, with Starlight’s Dave Shapiro serving as producer. It premiered on Thursday and screens again twice on Saturday with further shows on Wednesday and Saturday on the final weekend. Scott Free executive vice-president of production and Come Swim executive producer Michael Pruss (pictured, left) discussed the project with Stewart at the event.

How are you feeling after the premiere?
Kristen Stewart: I feel so lucky that so many people got to actually see it on a big screen and more importantly hear it, because sound is such a big part of it and it moves, it moves through you and the vibration is palpable and it makes you feel a little sick and it enhances the anxiety and that is even more satisfying. I have five screenings. So cool. Just that alone makes me so happy. We throw voices all over the room and it reflects the interior of a scattered brain and it feels like you’re being attacked by memories. It feels like voices are coming from all around you.

That opening wave sequence is powerful and looks almost hyper-real. Did you use effects?
KS: It’s incredibly real. I wrote [the male character] drying out and I felt it would only work if you see these abundantly hydrated mirages to show that he’s trying to absorb but he can’t. My storyboards were so ridiculously ambitious and my producing team never allowed me to diminish the original idea. We reached out to an underwater photographer who lives in Sydney and he has this camera that shoots 1,000 frames per second. You slow down time to a point that feels like what it feels like to be super depressed: you are ‘sludging’ through time and this wave is building and building and it never fucking breaks. If it was digital it would have been cheesy. We sifted through hours and hours to find those few seconds. You can shot that camera for 30 seconds and that ends up being three hours of footage.

What gave you the idea of this story?
KS: It started off pretty ambiguously. I was obsessed with the idea of a man sitting on the ocean floor and the contentment of that and the isolation and how dark that is because at a certain time that seemed really appealing to me. You can’t see light unless you open your eyes and it’s about allowing yourself to see because it’s always there.

It’s a full-frontal heartbreak movie. I’m definitely not shying away from what sparked this desire to capture these images. It’s just that first fall. You have that driving force that keeps you going and then all of a sudden it shatters and you think, ‘How am I going to live now?’ You attack yourself with memories and figure from every angle how it could have been different and what I could have said and what he could have said and there was this other person and you take two steps back and realise it wasn’t all bad. That’s why the second time round when you hear the same lines repurposed [in Come Swim], they’re pleasant, they’re not all bad. Depending on perspective you can murder yourself with evaluation and over-analysis.

Was this a response to one relationship in particular?
KS: I’ve had four incredibly public relationships. It’s about all of them. I’ve been thinking about it for five years or so and everything I’ve gone through with love. Those are catalyst situations that might start off about a relationship and there are certain traumatic experiences that lead you to certain existential experiences. I have to contend with the fact I’m living every day and trying to keep myself alive. I’m alone and we all are and I really wanted to convey that it’s normal.

You can aggrandise your own pain and think you’re alone in that and no-one really understands, but at the end of the day there’s something very comforting in thinking we’re all alone… Before you go to sleep in those last two seconds there are certain questions you cannot answer and you have to flow through them. It’s important to mediate on those subjects but at the same time but you can’t fall into it. It’s [about] relinquishing control and realising you have to be a part of life to enjoy it…. You can’t write the story of your life. It would be nice but it’s not the way to live.

MP: When you look back at a relationship it’s never linear, the remembrances of it, and it hits you in shards of memories. Often small things in the present can trigger very overwhelming memories and the film speaks to how you can make sense of overwhelming things that have happened and how do you move on from those and find solution. All of us [on the project] were looking at the journey from dissolution to contentment.

KS: Yes and allowing yourself to be not be weighted by something. And the whole thing is flow. If you fight water you are going to tire and drown.

MP: It’s that weird paradox of what you need the most can kill you and that was the motif we talked about a lot in the central process. There is that central paradox in love: you’re looking for belonging and it can destroy you. And it’s about embracing the unknowable aspects of life and realising you can’t draw a line under everything.

When did the idea of making the movie come to you?
KS: A couple of years ago I really wanted to do it and I had that first image of the guy on the floor and have him very, very thirsty and not be able to absorb the hydrations. I’ve read through all of my poems of the last five years and I saw I’d written the same thing over and over. I needed to repurpose this so I could write about something else. [Mike and I] were in Singapore doing Equals and I wrote it all down in a notebook and sent it to this guy [points to Pruss]. I’ve wanted to make movies since I was ten years old. But you have to have something to say. It’s incredibly personal but it’s also really simple. This is a total first-world, white people issue; talking about how sad you can get and how overwhelming that is.

MP: There’s as universality to it. We’ve all been alone, we’ve all felt depressed and felt the chaos of relationships in life and we all go through it.

Writing is such an interior process so what was it like to direct?
KS: It was trippy because when something’s worth it and really lives it makes itself and both as an actor and director I feel when something’s cohesive and comes together it’s miraculous. I’ve made a lot of bad movies but… the pride is not about having created something you can stamp your name on as an actor or director – it’s really more about the astonishment of an occurrence and being involved in an occurrence. Wow, this idea passed through all of us and ended up [as] this thing. I feel that way as an actor too.

You divvy up the responsibilities and it feels like you’re holding a bowl of water: a very shallow, heavy bowl of water and the finish line is a mile away and everyone needs to put one hand under it and make sure we don’t spill and by the end it’s really light because everyone’s got one hand under it and as an actor and a director I feel that. I started this thing but once it’s going everyone needs to put their hand under the bowl. You just cannot do this alone. This whole process is such a together thing.

Did you enjoy it?
KS: I had such fun. Manically happy. When things work out and everything’s running I looked like a crazy person, crazy eyes. So satisfying. I was like one foot in front of the other. You cannot think of it as a whole because it will bog you down. I’m not very result-oriented; truly, it’s about the experience of it, that compulsive thing. You can’t think about the entire wall; you have to put this brick down then maybe that brick and you stand back and you’ve built a wall.

How did it come together?
MP: At Scott Free we had a great relationship on Equals and Kristen worked with Ridley’s son Jake on Welcome To The Rileys a few years ago, so it was such a natural continuation and collaboration. It was helping a mate out at this point. Our partner on the film Starlight Studios and Dave Shapiro brought Refinery 29 in for the financing. We at Scott Free look at Kristen as family. One of the first things Ridley did when we showed him the film we he sent her a note saying it’s fantastic and that she was like family.

KS: He said this was confident filmmaking. I was literally skipping around my room.

MP: We had a great team. We had cinematographer John Guleserian and I introduced Kristen to a friend who’s an editor called Jacob Secher Schulsinger who’s shot for Lars von Trier and edited Take Me To The River. I had a feeling they would connect which is why I put them together.

As collaborators you share a great energy
MP: On our down time we’re both big readers and would talk about things we’d read that inspired us and the way we see the world. Our friendship evolved quite naturally. We have a good rhythm together and that’s a part of producing sometimes.

KS: There are the producers who are going to get the movie made and there are people like [Pruss], whom I feel I know why they’re doing this. Some producers are just about money and that’s fine. But you look at Mike’s story and he started at Focus Features bringing tea for people. I love people like that. He stepped it up and up and is doing amazing shit. He and [Clouds Of Sils Maria producer] Charles Gillibert are my fucking boys.

Will you direct more?
KS: I want to expand this into a feature. We’re looking at stuff. I’ll make a movie. I want to make a couple more shorts. [Stewart has said she is planning to direct a short on gun control next.] I love acting and I really don’t see much of a difference. I can work for people on a million different subjects, but when it’s your thing it needs to come out of you naturally. This did. The first cut, this was 40 minutes long. I could expand this into 120 minutes in a second.

And who is Josh, the only actor in Come Swim?
KS: He’s just my friend Josh who literally has done nothing. I wanted to play this part so badly and identified with him. I feel like we could be related, so it was the perfect fit. If it wasn’t going to be me I’m happy it was him.