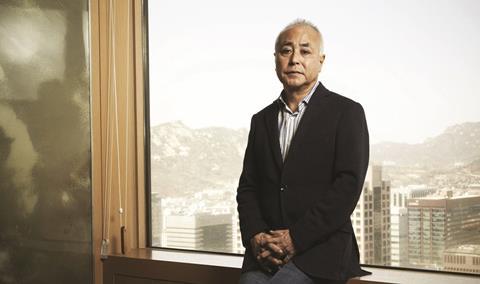 As head of Japan’s top talent agency Amuse for 35 years, Yokichi Osato has learned that many lessons from the music business can now be applied to film.

With sales of physical CDs down, Amuse - and its 15 subsidiaries and affiliates - knew that live concerts were the way to grow its artists’ careers and now presents more than 1,500 concerts per year. “The music business is shrinking and we cannot sell a lot of CD packages like we did before, so I had to do something,” Osato says.

Now the Tokyo-based company is bringing its philosophy of ‘live-ism’ to film as well.

Two years ago, Amuse launched affiliate Live Viewing Japan as a joint venture with the likes of Toho and Toei, to bring alternative content such as concerts and sporting events to cinemas. “

Digital theatres were increasing in not only Japan but across Asia, it was growing every year,” he says. “We thought it could be a good market. We saw we could expand our music through movie theatres.”

The strategy is working - audiences in the first year were about 200,000, in the second year 400,000 and he expects the third year of business to clear 1 million.

The intersection of film and music Live Viewing Japan is now branching out to distribute independent films.

Osato says he expects the outfit to work on about four to six theatrical launches per year, and the first release will be for Korean film The Thieves. Choi Dong-hoon’s action comedy, about South Korean thieves who team up with a Hong Kong crew for a heist, was a huge box-office hit in Korea.

“This film is such a good story and so well made,” he notes, before adding that releasing a Korean film in Japan is a big challenge.

The company will market The Thieves in a similar way to one of its concerts. The release will be limited to two weeks on 50 screens, and tickets are sold well in advance with seat assignments. Osato expects many of the film releases to have a music angle.

For instance, he says he would love to have distributed Oscar-winning documentary Searching For Sugar Man. He enjoyed that film (distributed by Kadokawa) so much he bought 500 cinema tickets for his artists and staff to see it, and “show how music and movies could go to another side”.

Documentaries will be of particular interest to the Live Viewing Japan slate. “Right now there is no market for docs in Japan,” Osato says. “I want to try to build that for good quality, human docs. The audiences are waiting for them.”

Live Viewing Japan has several advantages as it moves into film - exhibitors such as Toho and Toei are among the company’s shareholders so these firms have more incentive to support the releases, plus Amuse Group artists can promote the films to their fans and social-media followers.

“We have a lot of famous artists in the company that can help promotion,” Osato says. Some of the artists’ fanclubs have 500,000 members, which is a lot of potential movie-goers.

Tetsu Fujimura, the CEO of Filosophia and former Gaga president who is consulting for Live Viewing Japan, notes Osato is seen as one of the godfathers of the Japanese music industry. “That is a lot of power,” he notes.

Because Live Viewing Japan has its core of alternative content, the company will not be desperate to pick up too many films to fill slots. Fujimura says: “Usually companies must buy to survive, but they have other businesses so they can buy only those films they are most passionate about.”