SCREEN SUBSCRIBERS: Claire Carré talks to Jeremy Berkowitz about the challenges of a first feature, her fascination with memory and building the world of her film using places across the globe. 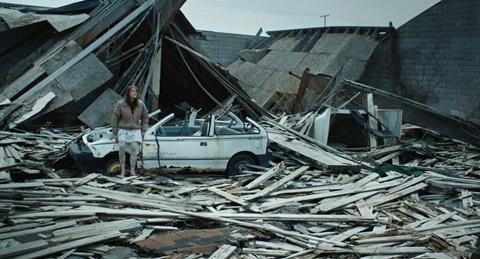 Embers centres on the survivors of a neurological virus that wipes out short-term memory across the globe. It premiered at the Oldenburg Film Festival last September and screens in Park City on Thursday.

I thought the landscape of the film was beautiful. I was wondering where you filmed.
It took us about a year to shoot the whole film. We shot it in three sections. We shot in April in Gary, Indiana. And in July, upstate New York, which is the sort of green with the cabin and all the toys. And then we shot in November in Poland. The tunnels and the exterior of the bunker are a real World War II bunker.

There was all this wasteland. Did your production design team put that together or was a lot of the stuff you see lying around?
We’re an indie movie, so I really tried to put in a lot of effort. I did all the original location scouting myself on the internet. A lot of the stuff we shot with the lovers and Chaos – the violent guy, the boy and his guardian – we filmed all that stuff in Gary. And I found Gary because I found the church there. I was looking for an abandoned church. And they had a beautiful one. It was really kind of amazing working with the film commission there. Our permit basically gave us a free pass to scout any abandoned building and there’s hundreds there so it was definitely an urban adventure.

There’s an abandoned Union Station, a church, a complete apartment building, a factory, a roller rink. I was definitely pretty excited about the places we found but they were so abandoned that all the production team had to bring furniture in and shelving in and get rid of tons of graffiti and bring it back to looking like it had inhabited more recently than it had been. Obviously, there bedrooms and everything in the bunker, those were already built. We were shooting in a factory that was under construction so there were just these raw concrete spaces and the art department had to do a ton to turn those into living spaces but at least they had a raw, concrete, blank space to work with.

How did you come up with the film’s memory affecting disorder?
I knew from the start that I wanted to make a film about memory. It’s my first feature so I wanted to make it about something that was important to me and essential to who I am. I’m a pretty nostalgic person and I kind of have a hard time living in the present. I keep thinking about the past or thinking about the future and the characters in the film can only think in the present, which kind of freaks me out. So I knew I wanted to do it about memory and I had read about Henry Mollison several years ago, who is basically discovered what part of your brain preserves your memory, which is the hippocampus. In the ’50s he had epilepsy and underwent an experimental procedure, which removed just his hippocampus from his brain and after that he couldn’t form any new memories for the rest of his life. So looking at him and Clive Wearing, who is a composer in the UK who is affected with retrograde and anterograde amnesia. Those were two great case studies that I looked at in terms of making the rules of the memory virus in the film.

You said you’re a nostalgic person. Do you think the people that lose their memory are living happier lives? Because the one character that has her memory seems to be the most unhappy person in the film.
That’s a really good point. I think it’s kind of a mix. I think to some extent it’s probably your personality and what you make it. There’s also some really bad things that happen in the film but also great things. Like the lovers: I think that they would prefer to remember each other than not, though on the other hand I guess they get to fall in love every day so that’s pretty great. I’m pretty fond of my memory. I would not want to lose it. For me, I think my past has made me who I am and I have some really precious memories of people that don’t exist anymore and if I lost the memories of them I would have nothing of them.

It would definitely be confusing every day to start over, but there was something beautiful about getting to watch them continuously fall in love. That’s a magical moment over and over again.
There is something great about being present and being forced to experience what is actually happening as it’s happening without the sort of curtain of what you’re expected.

How did you get the cast? Jason Ritter is a name. How did that happen?
We’ve been friends since kindergarten so I asked him to be in it. A lot of the cast were either friends or friends of friends. We did do casting in Spain for [the characters of] Miranda and her father. And we also did a casting session for Silvan [Friedman] who plays the little boy who was seven when we shot. But everyone else I knew myself. Like Eva who plays the girl, used to be my roommate in New York. Dominique Swain, I’ve known since middle school. Since this was my first film I was asking all my friends to be in it.

Well, you have some talented friends.
Aw, thank you.

I was watching it and I felt like this world had so much to expand on. Did you even consider writing this as a TV show?
It’s funny you mention that because we have been thinking about that actually. When we did some of our first screenings some people from the audience came out and said, ‘I really loved it. When’s the next episode?’ We were like, ‘Oh. We should think about that.’ I wrote it together with my husband Charles.

How long ago did you start writing it?
I think we started writing it in 2012.

It definitely works as a film, but I can see it setting it up for me. And on that, are these people we see the last survivors? Or are there more on Earth roaming around just like them?
I think that they’re a sampling of who’s out there. In my interpretation of it, the epidemic killed most people and the people who were able to survive are still suffering from the neurological path of it. But I didn’t want to put dead bodies everywhere. It’s been almost like ten years since the epidemic. There’s still people scavenging around. It already feels like a lot of people, but I wanted to follow a few stories from there, hopefully implying there’s other people out there. Whether there’s other people in secure underground places or it’s other people wandering around to different cities.

I mean the world is definitely sparsely populated for sure. I wanted to keep the scope of what you see small, but I wanted to imply it happened everywhere. This city is just an example of what you might find in other place.

I was wondering how you got the budget together?
We started with a Kickstarter campaign and part of the reason we shot it in sections is because we shot it as we raised money. So we raised enough money to shoot part of it and then try to raise more money to shoot the next part and most of our investors were friends, us, and two commercial production companies that donated a bunch of stuff to us. Bunker and Papaya Films in Poland. They took charge of the Poland section of the shoot. It was challenging for sure.

How has it been to see your film get into different festivals?
I think it’s been an unusual path because we started going to festivals in the fall. Slamdance is not our premiere. But I’m really happy that they’re playing us. I’m just so happy to show it to people and hear what they think. I edited the film myself so it was like living on a hard drive on my computer for a year. So, it’s pretty exciting to show it.

Do you have any future projects coming up?
We’re working on a sci-fi episodic project that we took to Independent Film Week in September. We’re working on the pilot of that right now and I have another feature written called The Shade Of The Sea, which we’re working on the fourth draft of right now. That one’s not sci-fi. It’s a psychological drama. It’s about a composer who’s mourning the loss of his wife and is roaming around Europe trying to get over her when he sees her get onto a ferry going to an island and he follows her. It’s kind of figuring out if it’s his dead wife. Is she a ghost? Is it her? What’s the deal? So, I guess I’m interested in mental stuff. It’s really different than Embers so it’s fun to work on something that’s just about a couple of people.