SCREEN SUBSCRIBERS: Filmmaker Paul Taylor talks with Jeremy Berkowitz about the use of dialogue in film, creating an alternate universe on screen and the influence Greek mythology has on his work. 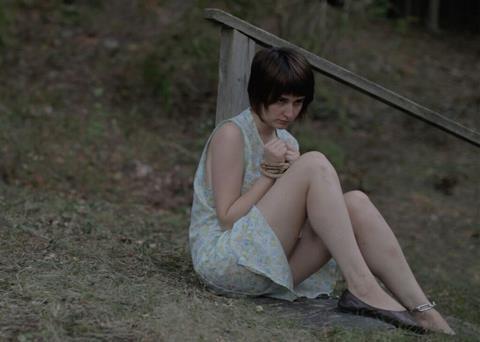 His film Driftwood, about an Old Man who takes in a young woman washed up from the sea, will premiere at Slamdance on Sunday January 24. This interview contains spoilers.

The first thing I wanted to say was that I really loved the movie. It was funny, unnerving, and disturbing.
Cool. Thank you very much.

How did the decision to make a film without any dialogue come about?
I guess it kind of started seeing a lot of independent films today and even just films in Hollywood are just so driven by dialogue and they rely so heavily on that aspect of filmmaking that I wanted to do something that was a little more traditional – bring it back to its roots and telling stories solely through images.

Was part of it that the people from the ocean didn’t have a language inherently?
Yeah. I suppose there was a little bit of that, too. I could’ve given them language, but then the whole idea behind them being so easily manipulated probably wouldn’t have worked either. So, there was never a conscious decision not to give them dialogue for that reason. I was almost trying to challenge myself to tell a whole story without dialogue and all that stuff kind of came afterwards.

I think that worked out. Did the actors improvise any of their actions within any of the scenes?
There were a few moments like that- where we would try something that was originally written in the script and maybe it wasn’t working out. And then they would suggest doing it one way and then we would go from there, but most of the time we stuck pretty strictly to the script. But there were moments where we experimented and tried to find other ways of completing the scene.

HERE THERE BE SPOILER: Was there any stand-out moment of this experimentation?
Not necessarily. The scene at the very end where he gets stabbed. That took a little while to do. Because the way it was originally written I was envisioning a different kind of environment or a different set so I wasn’t really sure how I was going to do it. Once we started rehearsing that we had to find a way to make it look a little more realistic.

The Young Woman’s acting was pretty incredible. At any moment she could’ve been thinking hundreds of things or nothing at all. How long did it take for you and Joselyn [Jensen] to really nail down those facial expressions?
Not very long. Joselyn is incredibly talented and I more or less wrote this part for her. We go back quite aways so as I was writing I was thinking of her. She got it. There were moments where I would just tell her to move a little differently or to not react as heavily or whatever it may be. Generally she was pretty on point most of the time, which made things a lot easier for me. But yeah, it was great working with her because she knew what I was trying to achieve, and that’s sometimes very hard to find in an actor or an actress.

How many other projects have you done with her?
We did two shorts a long time ago with another filmmaker friend of ours. And we also went to film school together – -or she studied theatre and I studied film at the same university. So that’s where we met.

I would assume from the title that in some form the film’s characters are pieces of driftwood. Is that the idea?
Yeah. Obviously driftwood is a piece of wood and it comes from the ocean and you see that a lot of people take pieces of driftwood and they make art with it, or they manipulate it, or they create statues with it, or whatever it may be. I felt that the title would be very appropriate obviously because the Old Man is manipulating them and turning them into whatever he wants them to be.

The Old Man’s actions can be viewed as motivated by kidnapping and parenting.
What’s interesting is that it kind of changes throughout the film. At first it’s kind of like he kidnaps her, but then he starts to really care for her. And she almost kind of cares for him. She becomes jealous once the other character shows up. But then she’s also looked at as a girlfriend, a wife and a child. So, there’s a lot of different dynamics that are constantly switching throughout the film.

I was wondering if the Old Man knew that these people wash up ashore? Is this a reoccurring thing for him? Is she not the first one?
I guess the idea when I was writing it is that this is a world that where older people, or people around his age, control everything. And younger people wash up and are used in whatever way. So, yeah it’s definitely something that’s going on most of the time. That other guy also comes along and he picks her up as well. It’s definitely a constant thing in that universe.

You don’t see this as taking place on Earth necessarily?
It does. For me it takes place on this planet, but in a parallel universe. But I thought it’d be interesting to create this universe using the world we live in now to show society in a different kind of light.

In regard to the parenting and kidnapping do you think the Old Man himself thinks he’s doing something selfless or selfish?
I never even really thought about it too much. For me he was just kind of there and she washed up and he took her in and things went the way they did. He was just there in the moment when she washed up and he took her. She was just going to be wandering around anyway so somebody else could’ve taken her. He wants to take care of her and be her parent. But we also allude to the fact that maybe he was married at some point. Maybe he’s grieving. And he takes her as a way to relive his former life with his dead wife. But nothing is explicitly stated; that’s the point. These are the questions we want the audience to ask themselves while they’re watching it. We don’t want there to be anything pointed or direct. That’s the fun of going to this film and experiencing it.

How did you come up with such a story?
I generally am inspired by a small moment in a film or even a title. I came up with the title Driftwood a long time ago and I just jotted it down. And I knew at some point I would use it and way after that I had done some research on Greek mythology. There’s this one Greek figure, I believe his name was Charon, who is the ferryman who takes souls over the River Styx to Hades. So I thought it would be interesting to see what would happen if souls actually came back or never made it across the river or he decided not to even bring them and kept them for himself and did what he wanted with them. And we went from there.

How’d you get the budget together?
I’ve been working since college and putting money away because I knew one day I was going to want to do something like this. A little bit of that. We crowdfunded a little bit as well and we just put our resources together and came up with a budget that way.

Do you have next films?
I’m going through a few different projects now. I’m trying to figure out what it is I’m going to do. It depends on what kind of budget we may get or not get at all. It will determine which direction we go in. But I hope we get some funding because I’ve got some really great ideas that could be made with the right amount of money.

Last thing I wanted to say was that last moment of the movie was one of the biggest jumps I’ve had from a movie in a long time.
That is really nice to hear. It’s funny because I never even imagined it would have that effect on people. But I screened it for some friends and family and that scene definitely gave a lot of jumps. It’s nice to see people react to the film and not just sit there passively.