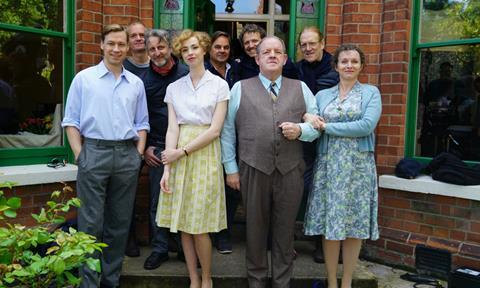 UK-Germany co-pro Trautmann, a biopic of legendary German goalkeeper Bert Trautmann, has rounded out its cast and begun filming in Northern Ireland.

Germany’s David Kross plays Trautmann and 2013 UK Star of Tomorrow Freya Mavor is the love of his life, Margaret, who was the daughter of his English coach.

The film tells the story of Bert Trautmann, the former Nazi paratrooper who became a goalkeeping legend at Manchester City, making 545 appearances and famously playing in the FA Cup final with a broken neck.

Trautmann is produced by Robert Marciniak, Chris Curling and Steve Milne with Lieblingsfilm, Zephyr Films, The British Film Company, Degeto Film, SquareOne Entertainment and Arri Media as co-financing partners. SquareOne will also release the film in German cinemas as its German Distributor. Degeto have secured the German Free-TV rights for the film.

The British Film Company backed Absolutely Fabulous The Movie and Dad’s Army. Trautmann is their largest investment to date.