Red Granite’s bash has to be the best Cannes party of the year. 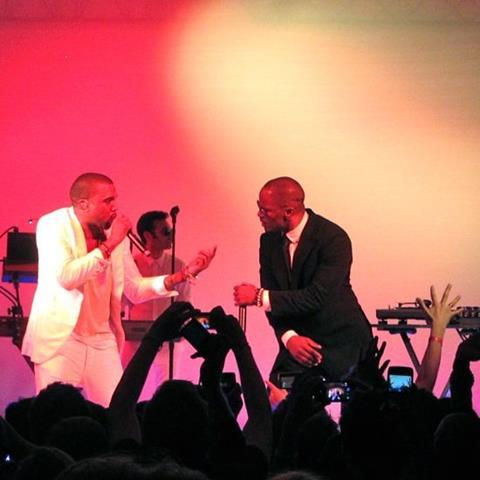 Nobody knows who will capture the Palme d’Or this year, but I think we’ve got a clear winner of the Party d’Or.

It was certainly the hottest ticket in town last night (with only a few hundred guests) because Kanye West was set to perform. I figured he’d sweep in for 3 songs and then move on, but instead he played an amazing hour-and-a-half set of crowdpleasers and some more personal favourites. Of course the highlight was when Jamie Foxx left the audience to join Kanye on stage for ‘Golddigger.’

There’s no way to talk about this party without being a name dropper. so here we go: Leonardo DiCaprio (set to star in Red Granite’s The Wolf Of Wall Street) could be seen by the right of the stage dancing, puffing a cigar, and swigging from a champagne bottle (very rock star); Jon Hamm was snuggling and dancing with his filmmaker partner Jennifer Westfeldt (Red Granite financed their new film Friends With Kids); Pharrell Williams did the warm up; and others milling around included surfer Bethany Hamilton, Rosario Dawson, Bradley Cooper, Adrien Brody and, errr… Kevin Sorbo.

The industry players in the crowd were totally into it. I don’t think I’ve ever seen Cinetic’s Dana O’Keefe happier.

And to top it all off, team Screen was standing by the pier where Kanye (still clad in all white) came through to take his boat home. So we got some hugs and kisses from Kanye to say goodnight — surreal to say the least.

So, well done Red Granite, last night has already entered the history books as one of those great Cannes parties. Last night and this morning I’ve heard so many other people gushing about how “awesome” the night was. It’s going to be hard to go back to earth with pints on the street at the Petit Majestic.

Photo provided by my buddy Eugene Hernandez from the Film Society of Lincoln Center, his blog’s here.