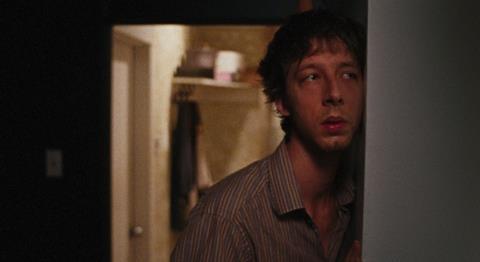 This slow-burning Canadian drama, that is punctuated with moments of rare sexuality, is an artfully made film that while intriguing and certainly oddly shocking in its final scenes may be just too slowly paced to attract a mainstream audience.

The film spirals – slowly – towards a brutal climax, all shot in a formal and structured manner, to reinforce the film’s message about the emptiness of society.

It is the sort of film that could well intrigue festival audiences – it had its world premiere at the Karlovy Vary Film Festival – but is likely to be a hard sell, even to art house-minded distributors. Its bleak world-view leaves little room for warmth or compassion, and there are a few hard-core sex scenes that may make theatrical release (and therefore television transmission) problematic.

Jointly written and directed by Mathieu Denis and Simon Lavoie, the Canadian French-language film essentially follows the rather mundane life of a young man named Louis (Emmanuel Schwartz) who lives in Montreal – he is a man with few friends, even few aspirations and no real interests in life.

The film opens with him ‘enjoying’ the attentions of a lapdancer, before moving on to a bus station where he meets up with a young red-haired woman named Rosalie, who he takes home and has ruttingly perfunctory sex with. This takes part in a section of the film titled ‘Ghosts’, detailing aspects of his past life. This also includes a deliberately dull scene of two friends from work helping him move – alone - into a new flat.

Part two of the film has a sub-heading of ‘Torments’, and includes Louis getting into a drunken fight in a bar, staggering about with his friends, and meeting his English-speaking next-door neighbour, Jay. Louis starts to be obsessed with Jay and his party lifestyle, and in party three – titled ‘Abysses’ he heads off to buy new clothes in readiness for a party in Jay’s flat – again a scene shot for a sense of the mundane, beautifully exemplified by the sense of sheer boredom emanating from the shop assistant aiding his attempt to find the right shirt to impress Jay.

The film spirals – slowly – towards a brutal climax, all shot in a formal and structured manner, to reinforce the film’s message about the emptiness of society. The filmmakers favour long shots and extended scenes with a minimum of dialogue (Carlos Reygadas’ 2005 film Battle In Heaven is noted as an influence) as they try and grapple with Louis’ internal and external demons.

The original title Laurentie presumably refers to the fact that it is also the poetic name given to Quebec, and was the name for the idea of an independent Quebec in 1930s to ‘50s.