Other double winners include Theeb, Sivas and In Her Place. 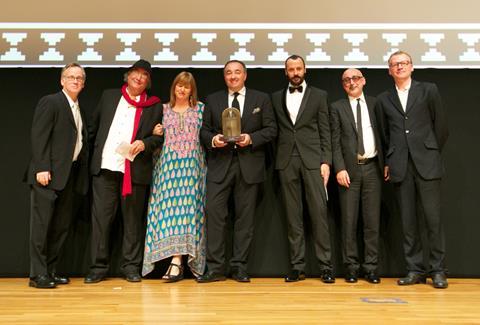 Andrey Zvyagintsev’s Leviathan followed up its recent victory at the London Film Festival by winning the Black Pearl Award at the 8th Abu Dhabi Film Festival.

As well as claiming the festival’s top prize, actor Alexey Serebryakov won the best actor prize in the narrative competition.

The Russian film, which explores one man’s fight against corruption, debuted at Cannes where it won Best Screenplay.

The winner of the Black Pearl in the New Horizons category was Alice Rohrwacher’s The Wonders. The director had been due to attend ADFF but had to cancel. Her sister, actress Alba Rohrwacher who plays the matriarch in The Wonders, was in attendance to accept the award.

The winner of the Black Pearl in the Documentary strand was Orlando Von Einsiedel’s Virunga. The doc centres on a group of individuals who risk their lives to save the last of the world’s mountain gorillas in the midst of a civil war.

Kaan Müjdeci’s Sivas, about a boy and his dog in rural Turkey, picked up two awards: best actor in the New Horizons strand for young performer Doğan Ïzci; and best script in the new Child Protection Awards.

Albert Shin’s In Her Place won best film in the Children Protection Awards while the film’s Yoon Da-kyung won best actress in the New Horizons strand.

The other double winner on the night was Theeb, Naji Abu Nowar’s film about a Bedouin boy who embarks on a perilous desert journey to guide a British officer to his secret destination.

Theeb won best film from the Arab world in the New Horizons strand as well as the Fipresci prize for best narrative film.

The awards ceremony at Abu Dhabi’s Emirates Palace, where the festival has been based for the past nine days, was followed by the 3D premiere of Disney animation Big Hero 6, which received its world premiere (in 2D) at the recent Tokyo International Film Festival.

Best Film
IN HER PLACE
directed by Albert Shin

UM GHAYEB (MOTHER OF THE UNBORN)
directed by Nadine Salib