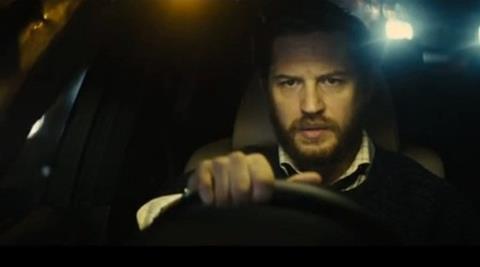 Locke has only one on-screen character, a building site foreman played magnificently by Tom Hardy, who spends the entire 80-odd minutes of the film driving his car and talking on the phone. That sounds like a recipe for an ultra-experimental yawn-fest, but in fact Locke is a gripping and deeply cinematic human and ethical drama, and one of the few real revelations of the 2013 edition of the Venice Film Festival – where for some reason, it screened out of competition.

Hardy’s performance as the calm, dependable Ivan Locke, whose life falls apart as he deals with the consequences of a one-night stand, could even be in with an outside chance of an Oscar-nod depending on what else comes along, but it’s not the only thing that will open theatrical doors (beyond its guaranteed Lionsgate UK release) to what, on paper, sounds like a filmed radio play.

The fine script’s ability to flesh out characters we never actually see while finding a fresh way to show a man in crisis, for whom nothing will ever be the same again, is another plus point of an experience, that, for the audience, is as much about admiring the art of stripped-down storytelling as it is about Ivan Locke’s emotional journey.

The real surprise, though, is just how watchable is a film in which almost everything happens off-screen. Filmed in just eight nights, on a budget of under $2 million, Locke consists almost entirely of shots of Ivan from the side, or face on through the windscreen, as he drives through the night, interleaved with what he himself sees: convoys of trucks, headlights and taillights, warehouses and traffic cones and motorway signage. The film picks up on the intuition of Iggy Pop’s song The Passenger – that driving at night is a form of cinema – but gives it a twist. Car window cinema is normally a soothingly passive experience; here it’s the visual soundtrack to a man’s world being turned upside down.

We first see Locke, still in his work gear, leave a building site and race off in his BMW. Gradually his destination, and the reason for his hurry, is revealed through a series of calls that he takes or makes on his Bluetooth carphone. He’s driving down to London to be in the maternity ward with Bethan (voiced by Olivia Coleman), a lonely 43-year-old woman who got pregnant after a one-night stand he had with her seven months previously when working on another building site.

She’s panicked by going into labour prematurely, and also needy to the point of emotional blackmail. Ivan, on the other hand, is a steady, grounded Welshman whose calm is all the more remarkable given that – as we soon discover – he hasn’t yet told his wife Katrina (voiced by Wilson) or his two soccer-mad sons about the affair.

And there’s another complication. Early the next morning, Ivan was due to supervise a massively responsible job, a foundation ‘pour’ of concrete that, we are told, will be the biggest single concrete pour in Europe outside of nuclear and military sites. So he needs to first attempt to talk his terrified Irish assistant Donal into taking his place, train him to do the job over the phone, stop him from drinking too much to function – and then inform his boss that he will not be there the next day.

Deftly juggling Ivan’s attempts to keep his family together and hang on to his job – but more importantly for this man of principle, to get the job he has been given done, the script takes us through a series of nicely-timed setbacks and humour-laced exchanges, and even fills in a little backstory as Ivan addresses angry monologues to an imagined backseat passenger – the father who abandoned him and his mother before he was born. These don’t quite work – solid Ivan doesn’t come across as an imaginary passenger kind of guy – but they’re one of the few wobbles in a story that otherwise rarely feels contrived.

We learn a lot about concrete in the course of the film, but the real strength of Locke is the way it shows a decent, honourable man doggedly, calmly determined to do the right thing even as his world unravels, regardless of whether the game is worth the candle. The admiration we feel for Ivan by the end of the film is the same admiration we feel for so many of cinema’s tragic, noble heroes, who walk to their fate with eyes wide open.