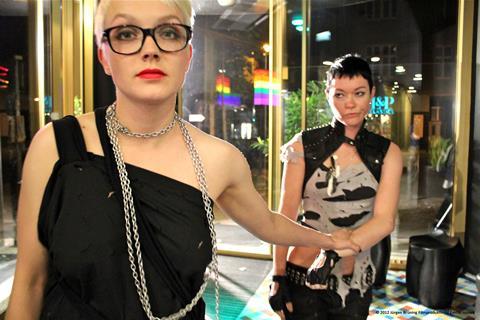 The comic banter of Mommy Is Coming is light, fun, even wholesome in its kinky team spirit.

Mommy Is Coming has the flimsiest of scripts. Claudia (Papi Coxxx), who’s black, and Dylan Eberhardt (Lil Harlow), who’s white and blonde, are chafing in their relationship as Dylan seeks wilder sex in Berlin. As feelings fray, Dylan’s mother, Helen (Maggie Tapert), arrives in town, eager to see her daughter and on the prowl for a man, since her own husband has turned to other women.

Cabdriver Dunye deposits Helen at a hotel where Claudia is working, disguised in the cheapest of stage moustaches as “Claude.”

This burlesque of mistaken identities and see-through disguises, filled with double-entendres that begin with the film’s title, feeds on Andy Warhol, John Waters and Bruce LaBruce as it moves mockingly from one sexual encounter to the next.  There is so much tongue in cheek (and everywhere else) here that you’re laughing hardest at the end, when a major taboo, even by the standards of Berlin dungeon play, is violated.

Wieland Speck, director of the Panorama section of the Berlinale, in which the film and others by Dunye showed, plays the husband of Helen, and makes no secret that he’s not an actor. Lil Harlow as Dylan is a close-cropped platinum blonde and plays the newly arrived American as a send-up of the Jean Seberg of Breathless.  Maggie Tapert, a 60-ish Zurich-based “sexpert” in the role of her look-alike mother, is as game as anyone else in the cast.

The comic banter of Mommy Is Coming is light, fun, even wholesome in its kinky team spirit. Yet wet leathery club scenes with multiple participants that seem intended to push the audience beyond the boundaries of queer cinema can feel studied and generic.  Dunye, a film professor at her day job in the US, is at her best here when she plays for laughs.