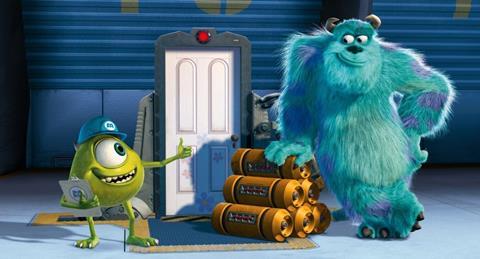 The same Disney/Pixar team that was responsible for the highly inventive animated features Toy Story, Toy Story 2 and A Bug’s Life, is also behind the impressive production of Monsters, Inc. the new witty, imaginative animated adventure, directed by veteran Pixar animator Pete Docter and assisted by Lee Unkrich and David Silverman (who are credited as co-directors). Displaying the inspired and distinctive vocal talents of John Goodman, Billy Crystal, James Coburn and Jennifer Tilly, this magical tale is set in Monstropolis, where monsters of every shape and size reside, and the largest factory draws its power from processing the biggest human screams.

Although well-positioned by Disney as an early Thanksgiving holiday release in the US, and shrewdly marketed (“We Scare Because We Care”), Monsters, Inc. may not repeat the spectacular business of the globally successful Toy Story pictures, but it should certainly play well - and for a long time - with young viewers. It will also reclaim the prominence and validity of the Disney logo that was slightly tarnished after the underwhelming performance, both artistically and commercially, of the old-fashioned summer-released Atlantis.

Central to the success of Monsters, Inc. is the colourful menagerie of monsters, in terms of size, shape and personality

Celebrating its 15th anniversary this year, Pixar makes its boldest statement yet with Monsters, Inc., the studio’s most advanced and sophisticated use of computer animation technology to date. For starters, the new feature called for 2.5 million rendermarks (a measure of computing power), compared with nearly 1.1 million used on Toy Story 2. More specifically, among the film’s many striking technical achievements is the breakthrough depiction of the characters’ fur and hair (and there’s plenty of both), which have the density, lighting, shadowing, and above all, movement that are consistent with the real thing.

Like the Toy Story features, Monsters, Inc. represents an entertaining work with memorable characters and hilarious situations that not only provides fun, but also offer the kind of adventures all children (and their parents) can relate to. As conceived by Pixar’s wizards, the new story draws on kids’ primal, universal and nocturnal dreams/anxieties about the alternate world that exists behind their bedroom doors, not to speak of fears and fantasies of mysterious creatures hidden in their dark closets.

Set in Monstropolis, a thriving company town, the film follows the hilarious misadventures of James P Sullivan, known to all as Sulley (Goodman), and his buddy, roommate and co-worker, Mike Wazowski (Crystal). Both work at Monsters, Inc, the largest scream processing factory in the monster world, where Sulley is the top kid Scarer and Mike his enthusiastic and reliable assistant.

The main power sources in this peculiar milieu are the collected screams of human children, a precious natural resource harvested by an elite team of scarers at the ominous, prestigious company. What complicates matters - and serves as the drive for the entire plot - is the monsters’ belief that human children are toxic; hence direct contact with them is not only discouraged but downright forbidden.

The feature’s first part depicts the monsters’ existence from their point of view, centring on Sulley and Mike and how their routines are determined by the unique norms and values that govern the factory and its eccentric denizens, both leaders and rank-and-file workers.

The story changes direction in the second reel, when a little girl named Boo (voiced by Mary Gibbs, the five-year-old daughter of Pixar story artist) accidentally follows Sulley back into his world, which jeopardises his career, throwing his entire life into chaos. Assisted by Mike, Sulley then schemes to rectify his mistake, but the members of the trio become emotionally attached to each other as they get deeply caught up in a series of complications, misadventures and unexpected intrigues.

The running joke is that Boo, a brave little girl who finds life on the other side of the closet more exciting than her real domestic life, is an enchanting innocent who is blissfully oblivious to the dangers that she faces - and the mess she creates wherever she goes.

Central to the success of Monsters, Inc. is the colourful menagerie of monsters, in terms of size, shape and personality. Hence, Sulley is a furry, eight-foot-tall 800-pound monster (the last thing a kid hopes to find in his or her closet), yet hidden beneath the vast, intimidating exterior is a teddy bear with inner gentility and warm personality. Similarly, Mike, Sulley’s Scare Assistant, is a one-eyed, lime-green creature that, despite his looks, is sensitive, quick-witted and even romantic.

Adding immeasurable colour and interest to what is basically a very slender story (even by animation standards) is a collection of creatures, each of which has at least one encounter with the central duo. Reliable independent actor Steve Buscemi, who usually plays losers (Fargo, Ghost World) brings his singular talent, humour and chicanery to the role of Randall Boggs, a slippery, eight-limbed character. A creepy, lizard-like monster, Randall would stop at nothing to become the new top Scarer (the scores are continuously tabulated and publicly posted on a big board), even if it means sullying Sulley’s reputation. Roz (Peterson) is the company’s dedicated and dyspeptic Dispatch Manager, who’s a stickler for details and paperwork.

Arguably the most distinctive voice is provided by James Coburn (who sounds like the late John Huston) as Henry J. Waternoose, the paternal crab-like CEO of Monsters, Inc., who is prepared to do what’s necessary - and in the process takes some desperate measures - to save the company that has belonged to his family for many generations. A relevant idea informs Waternoose’s current energy and business crisis, namely that times have changed and kids are no longer as easily scared as they used to be.

The “feminine mystique” factor is embodied by Celia (Tilly, using the most shrieking tones of her sexy voice), the highly-spirited, one-eyed, serpent-haired receptionist, who lusts after her “googley bear” Mike - and doesn’t take no for an answer.

A nice inter-generational link between Monsters, Inc. and similar pictures of yesteryear is provided by Frank Oz, the famed Muppet master creator, who does a brief turn here as Fungus, Randall’s constantly worried Scare Assistant.

Tremendous care and attention to detail mark every aspect of the production, which utilises 22 different sets, from Boo’s multi-coloured bedroom to a trendy sushi eaterie to a remote blizzard-bound home in the Himalayas, where a lonely creature called Yeti (Ratzenberger) rolls out a welcome mat when Sulley and Mike pay an unexpected visit to the human world. Special kudos also goes to production designers Harley Jessup and Bob Pauley for creating a 1960s-looking industrial town, with various assembly-line factories, and for an imaginative “Scare Floor” and “door vaults” that include 5.7 million individual and identifiable closet doors on hundreds of miles-long conveyor belts.

Monsters, Inc. lacks the post-modern wit and self-reflexive sophistication of DreamWorks’s Shrek, a box-office bonanza that made Disney (and Michael Eisner) the target of both verbal and visual jokes and appealed to both young and adult viewers. However, despite a simpler, straightforward tale and occasionally monotonous moments (particularly in the central reel), the new feature still delivers the basic goods expected of a