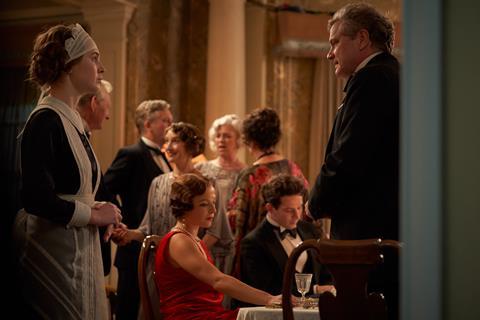 England, 1924, an unseasonably warm day in March. Jane (Odessa Young), a maid for the Niven family, meets Paul (Josh O’Connor), her secret lover, for the last time before he leaves to marry the daughter of one of the local families of note. It’s the final moment, though she doesn’t yet realise it, before changes in her own life are set in motion. This deft, shimmeringly sensual adaptation of the novel by Graham Swift elegantly weaves together multiple timelines – we rejoin Jane in the 1950s (Young’s dewey fresh complexion is not entirely convincing as that of a woman in her forties) and as an elderly woman, played by Glenda Jackson. It’s a richly detailed mosaic of a movie which pays as much attention to emotional authenticity – a dull ache of grief which is the aftermath of the First World War and a smouldering yearning between the two lovers – as it does to the story itself.

Director Eva Husson returns to Cannes after her second feature, Girls Of The Sun, received a mixed response in a competition slot in 2018. This is a markedly more confident piece of filmmaking, which is boosted by the contributions of a top tier crew, notably screenwriter Alice Birch and costume designer Sandy Powell. The presence of Olivia Colman and Colin Firth in supporting roles cements the film’s status as a prestige period picture, but the flighty non-linear structure brings a spark of unconventional spirit which chimes beautifully with that of the central character. Audiences will likely be seduced by the combination of Brit star power and the unapologetic steaminess of the central relationship. Lionsgate holds the UK rights; Sony Pictures Classics acquired the film for multiple territories including North America, Latin America and India.

Initially there seems to be something a touch Malick-like about the film’s wistful wisps of voiceover, overlaid on shots of breeze-tousled fields and dappled sunlight. But Husson is not preoccupied with beauty for beauty’s sake. The handsome houses of the Niven family and the neighbouring ‘tribes’ may be arresting and full of august chunks of inherited history, but it soon becomes clear that the war was particularly unforgiving, and that the families are walled up in their own sadness. It’s a stout fellow, stiff upper lip kind of milieu – Mr Niven (Firth) looks rather at sea as he rattles off his clipped pleasantries over breakfast. But the grief leaks out, in Mrs Niven’s (Colman) wounded fury over the unfairness of it all. Colman has few scenes overall, but she lands each of them with the force of a punch to the heart.

The soul of the film comes from the chemistry between the mesmerising Young and the two men in her life: the sexual charge with O’Connor in the 1920s and the more cerebral spark with Donald (Sope Dirisu) in later life. Both relationships, although glimpsed in fractured slivers of memory, feel fleshed out and fully alive.

It’s a quality production throughout, but plaudits are particularly due to Sandy Powell. She picks up on the prevailing emotional charges – the aching, bottomless blues of sadness and the fiery red passion – and uses them to inform the colour palette of the film’s gorgeous costume choices.

Screenplay: Alice Birch, adapted from the novel by Graham Swift