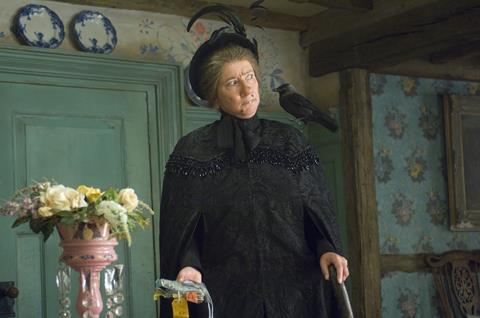 Emma Thompson weaves a distinctly quirky kind of English magic with Nanny McPhee & The Big Bang, a good-natured slapstick romp aimed fair-and-square at the kiddie market, though also featuring a strong acting line-up that helps make it an accessible title for the worldwide family marketplace.

The first Nanny McPhee film (released in 2005/06) was a solid success, with Emma Thompson – both star and screenwriter – crafting a nicely old-fashioned character that appealed to both kids and parents. Her Nanny McPhee is a darker and funnier spin on Mary Poppins, with her magical skills more subversive than saccharine sweet.

The film opens to the public in the UK in a series of 15 London premieres on Sunday March 21 as part of London Film Day, before opening around Europe in April, though isn’t set to arrive in the US till August.

The addition of Maggie Gyllenhaal to the cast may help the film’s transition to the US marketplace, though she is playing a very English character in an oddly similar fashion to a young Emma Thompson. Meanwhile cameos from the likes of Ralph Fiennes and Ewan McGregor may also help the film’s appeal.

Nanny McPhee & The Big Bang is set against a backdrop of English pastoral bliss, with hard-working Mrs Green (Gyllenhaal) struggling to cope with her three young children while her husband is away at war. To complicate matters she has been lumbered with her posh nephew and niece who have been sent from London to live with them, causing even more conflict between the kids.

Just as the in-house fighting reaches its peak the unsettling figure of Nanny McPhee arrives at their cottage door. With her hairy warts, snaggle tooth and ominous attire she initially scares the children…plus she has magical skills to stop them fighting, make them get on with each other and learn to help Mrs Green.

Matters are complicated by her spiv brother-in-law Phil (Rhys Ifans, playing his slapstick role with abandon) wanting to sell the family farm. Naturally the kids all bond together to try and save the day…and when they behave Nanny McPhee’s demeanor becomes more attractive (the warts vanish and she slims down, eventually looking like the Emma Thompson we know and love) and she has to announce that her work is done.

Though the underlying implication is that the story is set during World War II, the fantasy nature puts a spin on this. The ‘Big Bang’ of the title partially refers to an enemy bomber that drops a massive bomb onto a field near the farm – but the bomber simply has ‘enemy’ written over it, and the bomb is a bulbous ticking affair that the children have to try and defuse. Whether the notion of children and bombs is an appropriate story plot is open to debate, but the whole thing is deftly played for laughs.

At heart the film is a slapstick romp with some magical moments. The kids are all engaging – with newcomer Eros Vlahos excellent as the spoilt child sent with his equally haughty sister to live at the oh-so muddy farm – while special effects fun comes in the form of a band of rebellious piglets who not only manage to fly but also engage in a little CGI synchronised swimming.

Screenplay: Emma Thompson, based on the character from the Nurse Matilda books by Christianna Brand