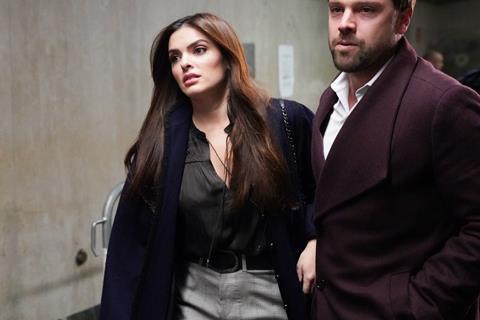 A former friend of Jessica Mann, one of the accusers in the Harvey Weinstein rape trial, told jurors on Monday (10) that Mann did not show any signs of distress on the day the former Hollywood producer allegedly attacked her.

Mann testified earlier in the trial that Weinstein raped her in a Manhattan hotel room one morning in March 2013.

Brazilian-born actress Talita Maia (pictured)  told the jury on Monday that she spent the rest of that day with Mann, and that Mann did not say anything about the rape allegation or show any sign of distress.

Maia said she was testifying against her wishes under a subpoena from Weinstein’s lawyers.

Weinstein, 67, has pleaded not guilty to charges in New York of raping Mann and to sexually assaulting former production assistant Mimi Haleyi.

Mann previously testified that the rape occurred in the course of an “extremely degrading” relationship with Weinstein that lasted for years.

On Monday, Maia said Mann “spoke highly” of Weinstein during her relationship with him, even calling him her “spiritual soulmate” at one point.

“She seemed to really like him as a person,” Maia said. Under cross-examination by prosecutors, Maia said she had a falling out with Mann some time before January 2017 and stopped speaking to her, though she said she did not dislike her.

Maia also said during questioning by prosecutors that Mann had once told her Weinstein was “controlling”. She said Mann had told her she was very upset when Weinstein pressured her to engage in a sexual act with another woman, an incident Mann had also described.

In response to follow-up questioning by Weinstein’s lead lawyer, Donna Rotunno, Maia denied that her falling out with Mann had anything to do with her testimony.

The defence then called another witness, Mexican-born social media influencer Claudia Salinas. Another one of Weinstein’s accusers, Lauren Young, testified that Salinas stood outside a hotel bathroom door while Weinstein assaulted her, which Salinas flatly denied.

Prosecutors rested their case last Thursday after jurors heard testimony from six women accusing Weinstein of sexual assault, including Mann, Mimi Haleyi and Annabella Sciorra, who said Weinstein raped her in her home in the early 1990s.

The trial began on January 6 and was originally expected to last up to two months, but it now appears that lawyers could deliver their closing arguments as soon as this week

Since 2017, more than 80 women have accused Weinstein of sexual misconduct. He has denied any non-consensual sex.