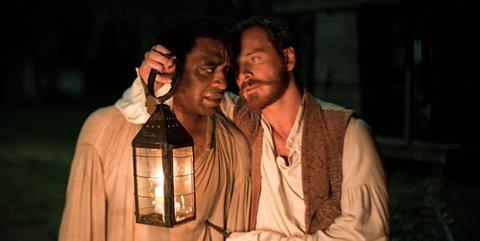 Following its ten BAFTA nominations and Golden Globe win for best dramatic film, 12 Years A Slave has got off to a stirring start at the UK box office, topping the chart and relegating American Hustle to second place.

With 12 Years A Slave set to expand from Friday (Jan 17), a week-on-week drop is likely to be minimal, meaning it stands a great chance of retaining the top spot as well as being a certainty to top the £10m mark during its run.

The remake of Canadian film Starbuck (which received a limited three-site opening for $4,700/£2,885 in the UK) opened slightly behind Vince Vaughn’s previous UK outing, The Internship, which recorded a $2.1m (£1.2m) bow from 409 sites and arguably benefitted from the additional presence of Owen Wilson.

Experiencing its first drop of over 50%, The Hobbit: The Desolation of Smaug added $2.5m (£1.5m) in its fifth weekend as it fell to third.

With the art house crowd arguably flocking to 12 Years A Slave, The Railway Man still enjoyed a solid UK bow.

Fox’s biopic is now up to $5m (£3.1m) in the UK and is well placed to become director Justin Chadwick’s best-ever UK performer, currently The Other Boleyn Girl’s $8m (£4.89m) result.

It needs a stronger hold in its fourth weekend if it’s to challenge Tropic Thunder’s $14.2m (£8.7m) as Ben Stiller’s highest grossing directorial outing in the UK.

The performance of Fox’s Devil’s Due this coming weekend could give an indication whether The Marked Ones’ relatively soft display is down to audience fatigue for either found footage or the Paranormal Activity series in general.

In its exclusive run at the Empire Leicester Square, Formula 1 documentary 1 – Life on the Limit recorded a $1,900 (£1,144) debut through StudioCanal.

This week sees saturation releases for Fox’s Devil’s Due (out Jan 16) and Universal’s The Wolf of Wall Street.

Sony’s Tim’s Vermeer and Content Media’s Crystal Fairy are among the films receiving a limited release.