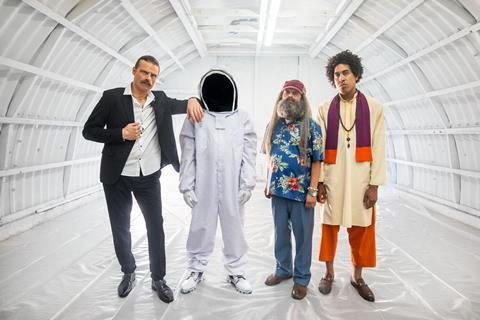 Organisers at the hybrid 29th Slamdance Film Festival have announced that the word premiere of Dimitri Coats’ Free LSD will close the festival on January 20 2023 as they also unveiled Narrative, Documentary, Breakouts, Spotlight, and Unstoppable programming line-ups.

Free LSD follows an adult store owner who takes an experimental drug that provides a glimpse into a parallel universe where he is the leader of a band battling evil aliens over the future of human consciousness. Keith Morris, Coats, Autry Fulbright II, DH Peligro, and Jack Black are among the cast.

The film will play in Spotlight Features alongside the documentary Downwind in which co-directors Mark Shapiro and Douglas Brian Miller expose the impact of decades of nuclear testing in Nevada.

Among the documentary selections are The Mad Writer in which hip hop producer L’Orange, confronts a troubling diagnosis, and Starring Jerry As Himself, about a retired Floridian recruited to be a spy for the Chinese.

As previously announced, Moby’s feature directing debut Punk Rock Vegan Movie will open the festival. The hybrid event runs in Park City, and Salt Lake City, Utah, from January 20-29, 2023. The physical element takes place from January 20-26 and the online component will appear on the Slamdance Channel from January 23-29.

The remainder of 2023 programming including Animated, Experimental, Unstoppable, Narrative, and Documentary Shorts programmes as well as the Digital, Interactive and Gaming (DIG) and Episodes line-ups will be announced on December 12.

Initial sections appear below. All are US and world premieres unless indicated otherwise.

MiND MY GOOFiNESS: The Self Portrait (dir. Alex Michel)

Waiting For The Light To Change (dir. Linh Tran)

What Is The Lie? (Phi, dir. Quark Henares)