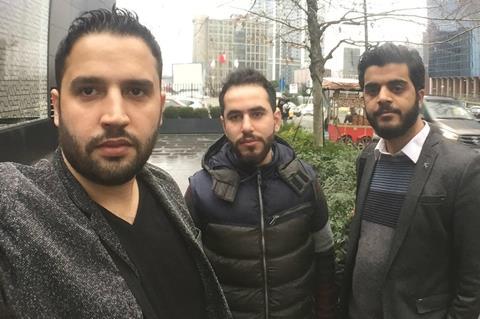 The Academy of Motion Picture Arts And Sciences has expressed its solidarity with Syrian producer Kareen Abeed of Oscar-nominated Last Men In Aleppo and his team after he was denied a visa to enter the US to attend the upcoming 90th annual Academy Awards.

It is understood Abeed, pictured at left with assistant director Hassan Kattan and cinematographer Fadi Al Halabi, will reapply after the consulate general of the US in Istanbul informed him his visa application had been denied, blocking hopes of joining other Oscar nominees in Hollywood on March 4.

US government rules forbid an appeal. Abeed and the filmmakers are currently in Turkey as they try to get permission to travel. Feras Fayyad directed Last Men In Aleppo.

“For 90 years, the Oscars have celebrated achievement in the art of filmmaking, which seeks to transcend borders and speak to audiences around the world, regardless of national, ethnic, or religious differences.

“As supporters of filmmakers – and the human rights of all people – around the globe, we stand in solidarity with Fayyad as well as the film’s producer Kareem Abeed, who was denied a visa to the United States to attend the Academy Awards on March 4.”