Al Pacino is to present screenings of his filmed production of Salomé and documentary Wilde Salomé at an event in London that will be streamed across the UK. 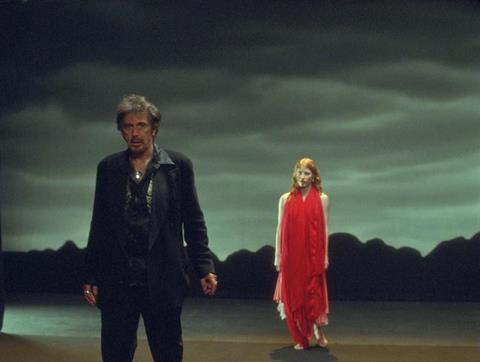 Al Pacino’s Salomé, based on Oscar Wilde’s play, and accompanying documentary Wilde Salomé are to get a UK release as part of an event at London’s BFI Southbank.

The two films produced by Barry Navidi and Robert Fox will be presented together Sept 21, followed by a Q&A with Pacino that will be broadcast live via satellite to cinemas across the UK and Ireland. The event will be hosted by Stephen Fry, who played the titular role in 1997 feature Wilde.

Salomé is a filmed version of the play that was Wilde’s most controversial work, which centres on King Herod and his lust for his young stepdaughter, Salomé.

The production, in which Pacino played Herod and Jessica Chastain (Zero Dark Thirty) played Salomé, was filmed at the Wadsworth Theatre in Los Angeles.

Wilde Salomé is a documentary that captures the challenges Pacino faced in performing in the play while simultaneously directing these two features. It follows his journey to Europe to understand more about author Wilde.

For a full list of participating cinemas, visit www.cinestage.co.uk/salome.