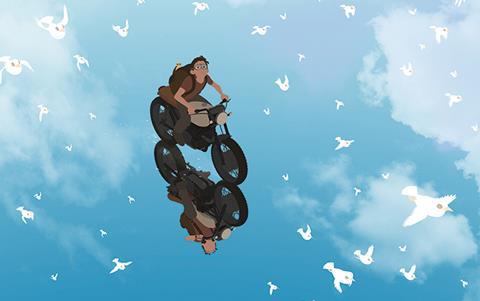 The film will premiere in Annecy’s new Contrechamp section in June when it will compete for the newly created Contrechamp Award and Contrechamp Jury Distinction. It joins CMG’s Annecy selection Salma’s Big Wish (Dia de Muertos), which company president Edward Noeltner and his team began selling at the EFM in Berlin in February. Annecy International Animated Film Festival runs from June 10-15.

Away is told in four chapters and recounts the adventure of a young boy as he travels across a mysterious land, traversing deserts and forests while pursued by a dark spirit. The project marks Zilbalodis’ first full-length feature after directing and producing seven animated shorts including Priorities, Aqua, and Oasis.

The filmmaker worked by himself for three-and-a-half years on Away, handling all aspects of production including screenwriting, storyboarding, animatic, rigging, animation, post-production, and composing the musical score.

“The result is an amazingly visual, singular journey of a young boy trying to survive what appears to be a plane crash on a deserted island”, said CMG Noeltner. “Our CMG team became enamored with the project after seeing just the first images of the film.”

Zilbalodis added, “I couldn’t be happier than to be premiering Away in the Official Selection of the highest regarded animation film festival in the world in Annecy. In addition, to be working with Cinema Management Group, who have over the past 15 years brought so many high quality animated films to the market is very flattering. We are very excited to get the film in front of audiences soon.”

The two films join CMG’s Cannes sales slate of animated features including The Canterville Ghost, Seal Team, Ainbo, and Noah’s Ark. Noeltner and his team have worked on the Oscar-nominated Loving Vincent, as well as Hoodwinked, Adventures In Zambezia, and Khumba.