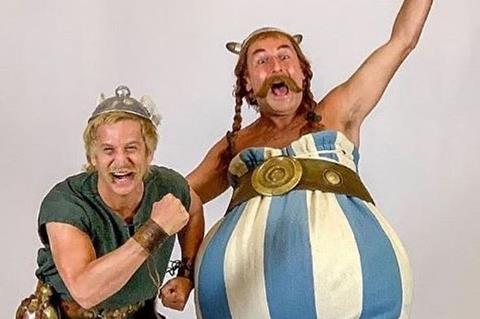 The producers of Guillaume Canet’s upcoming China-set feature Asterix & Obelix, The Silk Road have denied rumours in the French media that the shoot has been cancelled due to fears over the COVID-19 coronavirus epidemic.

The live-action feature, inspired by the world of Réné Goscinny and Albert Uderzo’s iconic comic strip characters, sees the Gallic heroes head to China for the first time in a story based on an original script by Philippe Mechelen and Julien Hervé.

Canet directs and co-stars as Asterix opposite Gilles Lellouche as Obelix.

Reports in the French media on Tuesday (18) suggested that the entire production had been put on hold due to the coronavirus outbreak in China, which is reported to have killed at least 1,868 people in mainland China to date and infected close to 73,000 people around the world.

Les Enfants Terribles, Pathé and Trésors Films, which are collaborating on the film, put out a statement on Tuesday afternoon denying the rumours.

“The shoot for Asterix & Obelix, The Silk Road will go ahead as planned, beginning on June 15 for 70 days, with shooting in China planned for the end of September,” the statement read.

“The producers would like to take the opportunity to express their support and solidarity towards the Chinese people who are living through this difficult time,” it continued.

The rumours and denial broke as cinema professionals head to the Berlinale and European Film Market (EFM), where the production is on the sales slate of Pathé International.

Most Chinese guests have cancelled their attendance due to the epidemic while the Berlinale announced “initial precautions” last week including equipping all sanitary facilities across the festival with disinfectant as well as setting up protocols on what to do if a suspected case occurs during the event.

There have been 16 cases of coronavirus in Germany to date, linked mainly to a training session by a German-Chinese company in Bavaria attended by an infected participant from Wuhan, where the virus originated.

One hundred German nationals who were evacuated from the Chinese province ended their 14-day quarantine period in a German military base on Sunday (16).