’Avatar: The Way Of Water’ surges to $67.4m worldwide after two days 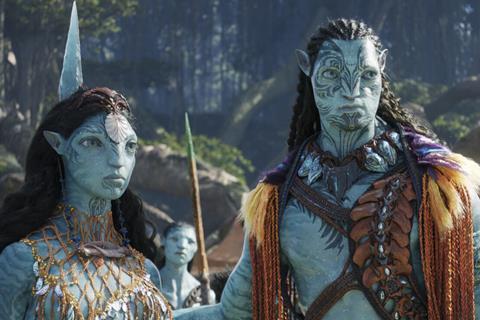 Avatar: The Way Of Water has raced to an estimated $67.4m at the global box office after its first two days, earning an estimated $17m in North American previews on Thursday and $50.4m from international markets.

Chinese box office is not included in this number however Disney sources said the tentpole has grossed around $5m in previews ahead of today’s opening day which is tracking to come in at $18.5m with strong early scores on Maoyan of 9.3, TPP 9.2 and Douban 8.4. Including China the running total as of today stands at $85.9m.

3D and premium format screens account for approximately 61% of North American previews heading into a weekend that Disney executives expect to play particularly well on Saturday and Sunday compared to other tentpoles. With “significant” advance sales for the second weekend, the fantasy sequel is expected to play well in successive weekends and may not be as front-loaded as Marvel films. It opens today in 4,202 sites.

Internationally Avatar: The Way Of Water opened in a further 29 material markets bringing 44 markets into play. Thursday opening day highlights included Mexico on $3.7m, Australia on $3.2m and Brazil on $2.4m as the film delivered the third highest opening day of the pandemic era in each territory.

Latest totals put South Korea on $5.9m, France on $5.7m (heading into a weekend of distraction for local audiences as the national side will play Argentina in the World Cup final), Germany on $4.6m, Italy on $2.8m, Indonesia on $1.5m, Thailand and Taiwan on $1.1m apiece, and Sweden and Hong Kong each on $1m.

Avatar: The Way Of Water has produced the highest opening day of the pandemic era in Czech Republic and opens today in the UK, China, Spain, Japan, Poland, Turkey, India and Vietnam.

After the first two days the film is tracking 167% ahead of the 2009 original (and still the highest grossing film of all time on an unadjusted $2.9bn) 72% ahead of Top Gun: Maverick, 52% ahead of Jurassic World: Dominion, and 39% behind Spider-Man: No Way Home on a like-for-like basis:

Avatar: The Way Of Water has produced the highest opening day of the pandemic era in Czech Republic and opens today in the UK, China, Spain, Japan, Poland, Turkey, India and Vietnam.