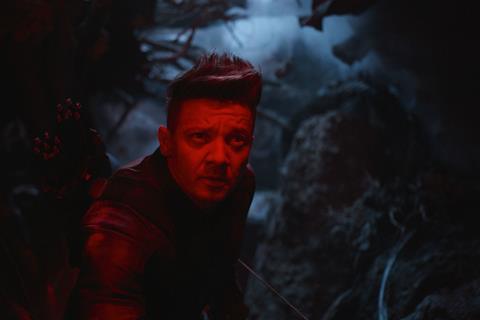 Avengers: Endgame, the final entry in the current cycle of Marvel comic book films, lived up to its hype this weekend, tumbling box office records around the globe.

That number beats the all-time UK box office opening record, which was James Bond film Spectre on £41.3m back in October 2015.

Remarkably, Spectre’s figure was across seven days after a Monday opening, i.e. four days of previews (Mon-Thurs, when it took £21.3m) and then the three-day opening weekend (£20m).

Endgame has topped that figure in just four days. It has also broken the Fri-Sun opening weekend record of £24.3m held by Star Wars: The Force Awakens, with a remarkable £31.4m.

That means the Marvel film also comfortably topped the previous entry in the franchise, last year’s Avengers: Infinity War, which had £23.1m Fri-Sun and £29.4m including the Thursday.

Elsewhere for Disney, Dumbo was up 8% this weekend on last week’s session, taking £1m for £23.4m to date.

Elsewhere, the relatively poor weather in the UK this weekend, contrasted with last week’s sunshine, saw UK audiences head back to the cinema. And not everyone was watching The Avengers, with several films posting impressive holds.

Family animation Wonder Park grossed £452,000 this weekend, an impressive 52% uptick on its previous session. The film is now up to £3.8m in the UK.

Red Joan posted an impressive hold by dropping just 3% on last weekend with £420,629. The film is now up to £1.5m in the UK and is ticking over nicely.

Shazam! was one entry to suffer a significant drop this weekend, with the superhero film losing both screens and audiences to its genre counterpart The Avengers. It posted £398,000, a drop of 59%, and is now up to £12.9m in the UK.

Ash Is The Purest White, the Jia Zhangke title from Cannes last year, opened to £12,347 from 10 screens.