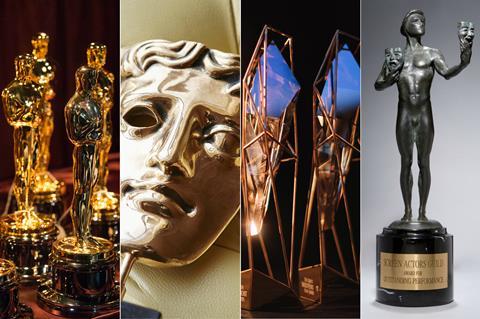 The 2020-2021 awards season was like no other before, with changes to dates, locations and formats due to the Covid-19 pandemic.

Screen has curated this list of dates and deadlines for the key international awards, updated according to any changes.

A 2021 calendar for film festivals and markets is available here.

8: EFAs talk: From Survival To Revival: Building The Post-Covid Future

22: Bafta draft entered films list to be made available to voters and entrants

30: Golden Globes deadline for television nomination ballots to be mailed to HFPA members

31: Oscars – international feature submissions must have screened in their country of origin by this date

31: Film Independent Spirit Awards - television series must have aired by this date to be eligible

4: SAG deadline for paying November 2020 dues and/or changing address to be eligible for final ballot

6: Bafta deadline for requests to changes to the draft entered films list and SVFX statements

11: Bafta – all films must be available to voters on the View portal

13: Golden Globes deadline for motion picture nomination ballots to be mailed to all HFPA members

26: Bafta round one voting closes at 18.00 GMT, deadline for SVFX reels

29: Oscars deadline for withdrawing a film from consideration

1: DGA entry deadline for films with planned, scheduled or actual theatrical release between January 1-February 28 2021; and for television entries broadcast January 1 2020 to February 28 2021

28: Oscars – films in general categories must have a release by this date

5: WGA deadline to vote for screenplay and series nominations

10: SAG final votes must be cast online or ballots received by 12.00 PT

9: Bafta entered films must be screened to the public by this date (except for films not in the English language and documentaries)

30: Bafta – films not in the English language and documentaries must be screened to the public by this date