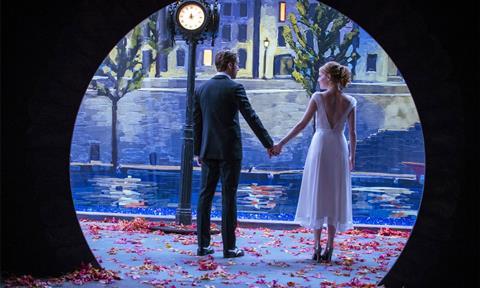 La La Land was the big winner at the 70th Bafta Film Awards on Sunday night (Feb 12), scooping five awards from 11 nominations, on a night when voters largely spread the love: no other film picked up more than two prizes.

As was widely anticipated, Casey Affleck won Leading Actor for Manchester By The Sea.

However, in an acting category shock Lion’s Dev Patel triumphed over Moonlight’s Mahershala Ali for the supporting actor award.

Barry Jenkins’ Moonlight went away empty handed from its four nominations and it wasn’t the only critically lauded film to be denied.

Nocturnal Animals and Arrival managed only only one win - best sound for the latter - from their combined 19 nominations.

Despite some predicting a sweep for Damien Chazelle’s film, it was ultimately beaten out in the following categories: costume design (which went to Jackie’s Madeline Fontaine), sound (which went to Arrival’s Claude La Haye, Bernard Gariepy Strobl and Sylvain Bellemare), editing (John Gilbert for Hacksaw Ridge), production design (Stuart Craig and Anna Pinnock for Fantastic Beasts And Where To Find Them), original screenplay (Kenneth Longergan’s Manchester By The Sea),

In the night’s first category, outstanding british film, Ken Loach’s I, Daniel Blake triumphed over Andrea Arnold’s American Honey. It would be the film’s only conversion from five nominations.

Accepting his prize, Loach took the opportunity to criticise the British government’s treatment of refugees: “The most vulnerable and poorest people are treated by government with brutality”.

In the documentary category, Ava DuVernay’s US prison doc 13th triumphed over a strong field that included political doc Weiner.

For animated film, Kubo And The Two Strings fended off a trio of Disney films: Finding Dory, Moana, and Zootropolis.

Former Screen Star of Tomorrow Tom Holland, who plays Spider-Man in Captain America: Civil War, was crowned Bafta’s 2017 Rising Star, which is voted on by the public.

On a night when political sentiment was expected on stage, speeches were generally less impassioned than recent US events. There were a number of references to Donald Trump and Brexit, however.

Bafta chair Jane Lush kicked off proceedings with the following quip: “Such is demand for British talent, I’m worried someone will build a wall across the Atlantic to keep us out!”

Host Stephen Fry got in on the Donald Trump act in his opening monologue by stating that the audience was filled with “overrated people”.

“Let’s find out who the Russians have decided have won,” joked Fry, continuing the theme.

Isabelle Huppert, a presenter on the night, alluded to Brexit when she said: “We will always need a United Kingdom, whatever happens.”

Curzon CEO Philip Knatchbull thanked Bafta for the company’s outstanding British contribition to film award and also made reference to the decision to leave the EU: “What an amazing privilege to sit here, to follow in the footsteps of so many giants of the film world”.

“We are immensely proud and grateful to have a Bafta of our own,” he said, adding that it was “the directors that make us who we are.”

Brexit “would be much harder and our lives are the poorer for it,” he concluded.