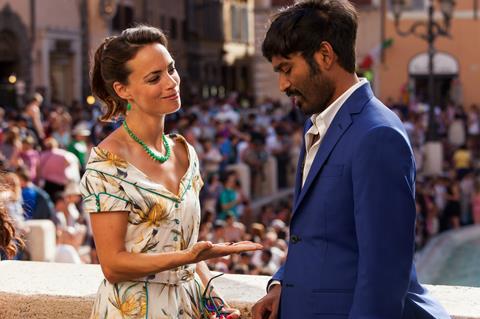 Bérénice Béjo and Dhanush in ‘The Extraordinary Journey Of The Fakir’

Quebecois Ken Scott (Starbuck, Delivery Man, La Grande Séduction) directed the English-language France-India-Belgium co-production about a Mumbai hustler who embarks on a voyage across Europe in search of his estranged father.

En route, the traveller love in a Swedish furniture store in Paris, gets into trouble with Somali immigrants and winds up in London, finds fortune in Rome, and escapes an unlikely adversary in a hot air balloon.

Romain Puértolas and Luc Bossi adapted the screenplay from Puértolas’ novel The Extraordinary Journey of the Fakir Who Got Trapped in an Ikea Wardrobe. Bossi produced through his Paris-based Brio Films, and the co-producers are Vamonos Films, Little Red Car Films, Scope Pictures, M! Capital Ventures, Impact Films, and Golden Ratio Films.

A-Z films will release the film day-and-date with the US, India and Canada on June 21.

“This film is a universal story that is a joy ride for every member of the family,” said A-Z Film president Antoine Zeind. “Director Ken Scott has done a remarkable job bringing together not only many parts of the world, but also mixing in plenty of emotion through laughs, storytelling, and social commentary. I know Canadians will be very taken by The Extraordinary Journey Of The Fakir and I’m excited to bring this adventure to them.”