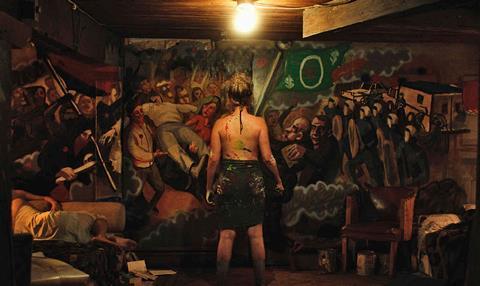 The Berlin Film Festival has revealed the completed list of titles that will play in this year’s Generation sidebar, which focuses on youth and children’s films.

In total, there are 62 short and feature-length films hailing from 41 countries.

Titles include the world premiere of Carla Simon’s coming-of-age feature debut Summer 1993 (Estiu 1993), which has already been snapped up by New Europe Film Sales.

Among the further films added are features from China, the USA and Korea.

As previously announced, Michael Winterbottom’s music documentary On The Road will open the Generation 14plus programme this year.

Further films playing in the strand include Dash Shaw’s My Entire High School Sinking Into The Sea, which features the voices of Jason Schwartzman, Maya Rudolph, Lena Dunham and Susan Sarandon, and 2016 TIFF Platform title Those Who Make Revolution Halfway Only Dig Their Own Graves [pictured].

“Our world is not in great shape. Often this means children and adolescents are left on their own and have to search for solutions and ways out of their predicaments. Generation shows young people on the move, crossing boundaries and tearing down walls, erecting barricades and overcoming them. Everything is in motion,” commented section head Maryanne Redpath.

Ben Niao (The Foolish Bird)
The People’s Republic of China
Dir. Huang Ji, Ryuji Otsuka
World premiere
For the sake of her mother, who lives far away, withdrawn Lynn searches for a way to be accepted into the local police academy. At the same time, the 16-year-old gets caught up in a criminal mess involving stolen cell phones. Huang Ji and Ryuji Otsuka (The Warmth of Orange Peel, Generation 2010) employ precise imagery to tell a story of isolation and lack of perspective in a small Chinese city marked by corruption, sexual violence and the all-permeating presence of new media.

Freak Show
USA
Dir. Trudie Styler
World premiere
Somewhere between David Bowie, Lady Gaga, Freddy Mercury and Oscar Wilde, Billy has carved out his own spot in the sparkling firmament of pop culture. Though the denizens of his conservative surroundings find all this markedly less fabulous, Billy has no intention of deviating from his plan to campaign for the role of Homecoming Queen at his school. What at first seems a high school caper transforms into a bombastic yet nuanced drama, one which earns the attribution that Billy himself has also claimed as his own: trans-visionary. Aside from Alex Lawther’s brilliant performance, Bette Midler, Laverne Cox, Larry Pine and Ian Nelson also shine in this one-of-a-kind film.

Loving Lorna
Sweden
Dir. Annika Karlsson, Jessica Karlsson
International premiere
In Ballymun, a poor suburb of Dublin, horses have been an integral part of everyday life for generations. 17-year-old Lorna’s family is no exception. Lorna would like to become a farrier after she finishes school, if only she weren’t plagued by a bad back. In this poetic study, the two Swedish directors paint a portrait of a young woman in search of happiness, fulfilled dreams and her own proper place in the world.

Não devore meu coração! (Don’t Swallow My Heart, Alligator Girl!)
Brazil / Netherlands / France
Dir. Felipe Bragança
European premiere
The Rio Apa, the river marking the border between Paraguay and Brazil, serves as the central setting for this visually stunning, modern and powerful Romeo and Juliet story of the relationship between 13-year-old Joca and the mysterious Guaraní girl, Basano. Bragança tells his tale of an adolescent “amour fou” against the backdrop of contemporary conflicts concerning land theft and cultural identity. His fiction feature debut makes a strong impression on the big screen also through the successful use of both young Brazilian stars and local non actors.

Poi E: The Story of Our Song
New Zealand
Dir. Tearepa Kahi
European premiere
The incredible story of a Maori pop song that took New Zealand’s charts by storm quite unexpectedly in 1984. Back in those days it was a near miracle for a piece of traditionally inspired music to become so popular. That is, until singer Dalvanius Prime, an imposing Maori with a powerfully smooth voice, and the singers of the Patea Maori Club came along. Prime had long been into soul – but now he combined the Maori-language song with modern beats and rap on stage. The media would have preferred to pretend he didn’t exist. Happily, both the song and video managed to become cult hits and helped many Maoris – especially young folks – to gain a new sense of self along the way.

The Inland Road
New Zealand
Dir. Jackie van Beek
World premiere
On a road running through the New Zealand countryside, a fatal accident brings 16-year-old Tia together with expectant dad Will. Along with Will’s pregnant wife Donna and four-year-old Lily, a finely spun and electrifying drama about wounds both visible and invisible unfolds. This beautifully shot, atmospherically dense work is New Zealand native Jackie van Beek’s feature film debut as a director. Berlinale audiences have been able to enjoy her comedic and acting talents previously (What We Do in the Shadows, Generation 2014) as well as her work as a short film director (Go the Dogs, Generation 2011).

Shkola nomer 3 (School Number 3)
Ukraine / Germany
Dir. Yelizaveta Smith, Georg Genoux
World premiere
Thirteen adolescents from a rebuilt school in South Ukrainian Donbass relate their hopes and fears. In rigorously composed shots, the documentary film shows the protagonists in their everyday environment, while they tell of experiences that move them, of nascent new loves and personal loss alike. The war is often only immediately perceptible on the periphery, yet it makes its presence felt as an unavoidable frame of reference. The puristic way in which it is shot renders the overall impression made by Yelizaveta Smith and Georg Genoux’s film all the more haunting.

Soldado (Soldier)
Argentina
Dir. Manuel Abramovich
World premiere
Following orders, rehearsing snappy marches and running through more drills than you can shake a drum stick at. A 19-year-old Argentinian man goes off into the army, where he becomes a drummer in a military band. A measured but poignant study of the collision between young individuality and military uniformity, which expands on the contradictions and uncertainties of entering into adulthood within the constraints of a rigid hierarchy. A coming-of-age story set in a “total institution”.

Amelie rennt (Mountain Miracle – An Unexpected Friendship)
Germany / Italy
Dir. Tobias Wiemann
World premiere
Headstrong Amelie is the queen of cursing – at her parents, her patronising doctors and her damn asthma above all else. During a forced stay in a special clinic in South Tirol she suddenly decides to run away. During the arduous trek up the mountain she not only gains an unsolicited travelling companion, she is also confronted by risky trials of courage and the overwhelming tingle of first love. An emotional roller-coaster ride.

Becoming Who I Was
Republic of Korea
Dir. Moon Chang-Yong, Jeon Jin
International premiere
Angdu is not your average boy, he is Rinpoche. In a past life he was actually a venerable Buddhist master. Together with his carer, he sets out one day on foot from India to distant Tibet, the centre of his faith. Questions about friendship and life in general accompany the duo on their trek through the awe-inspiring landscape of the remote alpine region. With its narrative approach steeped in a serene sense of concentration, this film, composed over a period of eight years, is a fundamental experience in its own right.

Estiu 1993 (Summer 1993)
Spain
Dir. Carla Simón
World premiere
Summer in Catalonia, 1993. For six-year-old Frida, the death of her mother means the beginning of a whole new life. In the loving care of her uncle and his family far away from her home in Barcelona, she first has to get used to her new life in the countryside. Moments of childish mischievousness turn into thoughtful detachment. Despite the summery atmosphere, serious undertones underlie this precocious coming-of-age drama. The inevitable consequences of AIDS, in those days still incalculable, have induced in gentle images Carla Simón’s (Berlinale Talents alumna) stunning debut feature film.

Oskars Amerika (Oskar’s America)
Norway / Sweden
Dir. Torfinn Iversen
World premiere
Torfinn Iversen’s feature debut is based on motifs and characters first explored in his short film Levi’s Horse (Generation, 2012). Now this moving portrait of an unusual friendship can be enjoyed at length on the big screen. Oskar’s deepest wish is to be able to ride on the prairie with his mother over summer break. But alas, everything turns out differently than expected and the 10-year-old is forced to spend his vacation on his grumpy grandfather’s farm. Oskar’s only friend is the outsider Levi, who talks with his pony. Together they hatch a plan to get away from their grim reality: they’ll row across the Atlantic to America in Grandfather’s boat!

Piata loď (Little Harbour)
Slovak Republic / Czech Republic / Hungary
Dir. Iveta Grófová
World premiere
Crushed by her mother’s lack of affection for her, ten-year-old Jarka stumbles upon two abandoned infants. Together with her neighbour 8-year-old Kristian, she lovingly cares for the tiny twins in what becomes a welcome escape from her own dysfunctional family situation. The Slovakian director’s film is an adaptation of a novel by Monika Kompaníková, in which children assume the roles of adults. The story, sensitively told from the children’s perspective, employs dynamic imagery to trace the universal desire for family and a sense of emotional security and belonging.

Uilenbal (Owls & Mice)
The Netherlands
Dir. Simone van Dusseldorp
International premiere
Meral is new in town and the first friend she makes is her little grey housemate: the mouse Peepeep. On a school trip both are confronted by the wonder and challenges of life. Meral is forced to watch as her beloved new buddy is swept up by an owl. In spite of this frightening development, through rocking musical numbers, owl pellets and the wonders of life in the woods Meral learns to understand the meaning of true friendship. Dutch director Simone von Dusseldorp will excite the audiences with this Generation highlight.

Upp i det blå (Up in the Sky)
Sweden
Dir. Petter Lennstrand
International premiere
Pottan’s stressed-out parents actually wanted to drop her off at summer camp, but somehow the 8-year-old ends up at a scrapyard inhabited by extremely odd residents instead. Together the gang is hard at work building a homemade spaceship so that they can blast off for the stars. In his feature film debut, complete with a healthy dose of humour and a great appetite for adventure, television producer and puppeteer Petter Lennstrand tells a tale of unexpected friendships and what they can enable us to accomplish.

Wallay
France / Burkina Faso / Qatar
Dir. Berni Goldblat
World premiere
When his father sends him off to Burkina Faso to visit relatives, 15-year-old Ady is excited at the prospect of being able to enjoy a laid-back vacation in his native land. Alas, on arrival the young man is met with a chilly reception and it soon becomes clear to him that his trip is not going to be the pleasant break from life back home that he expected. Swiss director Berni Goldblat approaches his feature film debut with the sharp eye of a documentary filmmaker in this depiction of everyday life in his adopted West African home of Burkina Faso.