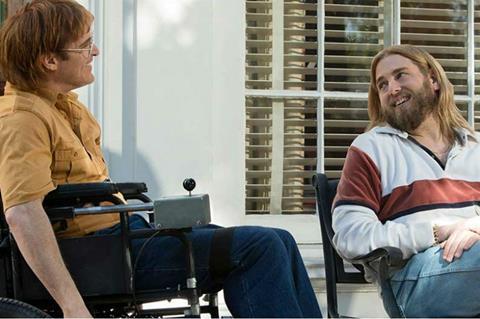 Don’t Worry, He Won’t Get Far On Foot

The Berlin Film Festival (15 - 25 Feb) has revealed the first films within its Competition and Berlinale Special lineups.

Alongside the previously announced opening film, Isle of Dogs by Wes Anderson, seven productions and co-productions from France, Germany, Italy, Poland, Switzerland, Serbia, the Russian Federation, and the USA are announced for the Competition.

Gus Van Sant’s drama Don’t Worry, He Won’t Get Far, which will debut at Sundance, is the only film announced today which is not a world premiere. Joaquin Phoenix, Jonah Hill, Rooney Mara and Jack Black star in the biopic of John Callahan who became paralyzed after a car accident at age 21 and turned to drawing as a form of therapy.

In Isabelle Huppert thriller Eva, a playwright encounters a mysterious woman when he takes shelter in a chalet during a violent snowstorm. The sixth collaboration between director Jacquot and Huppert is adapted from James Hadley Chase’s novel which was previously made into a 1962 movie directed by Joseph Losey with Jeanne Moreau in the title role.

Stuber’s drama In The Aisles stars Toni Erdmann actress Sandra Hüller, while Bispuri’s drama Daughter Of Mine, sold by The Match Factory, charts the relationship between a young girl and her biological and adoptive mothers.

German Jr., whose latest film Under Electric Clouds also played in Berlin’s competition, returns with a movie dedicated to several days in the life of Russian writer Sergei Dovlatov.

Meanwhile, Coixet’s drama The Bookshop, recent recipient of 12 Goya nominations in Spain, stars Emily Mortimer as a woman who decides, against polite but ruthless local opposition, to open a bookshop, a decision which becomes a political minefield.

Don’t Worry, He Won’t Get Far on Foot

By Benoit Jacquot (Three Hearts, Diary of a Chambermaid)

Figlia mia (Daughter of Mine)

In den Gängen (In the Aisles)

By Philip Gröning (Into Great Silence, The Police Officer’s Wife)

By Małgorzata Szumowska (In the Name of, Body)

By Isabel Coixet (Things I Never Told You, My Life Without Me, The Secret Life of Words)

By Lars Kraume (The People vs. Fritz Bauer)