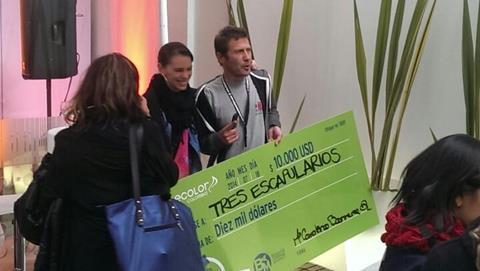 The 5th Bogota Audiovisual Market (BAM) (July 14-18) closed on Friday night with awards and referrals to industry events in Locarno and San Sebastian.

The road movie, produced by Cinempresa.com, focuses on freedom fighters Nico and Lorena who are ordered to assassinate an ex-guerrilla – a heavily pregnant woman named Indira. As the duo develop a romance, they begin to question having to kill the whistle blower and her innocent unborn child.

More than 250 applications were submitted for this year’s BAM Projects, covering films in development, of which 33 features were chosen.

Of these, the winner of the Hangar Films prize for best documentary, worth $10,000 in post-production services, was Camila Rodriguez Triana’s Sincerely (Atentamente).

Produced by Cali-based Heka Films, the doc centres on the director as she takes up working at an old people’s home and delves into the life experiences of the characters around her to help deal with her own issues.

A special mention went to Clare Weiskopf’s documentary, To The Amazon, which will receive $5,000 in post-production services from Hangar Films.

The film centres on the director’s mother, who moved to Colombia from London in 1959 and went on to live in the Amazon jungle.

As part of two new partnerships, the producers of the three best fiction projects will take part in the Industry Days at the 67th Locarno International Film Festival (Aug 6-16) and the third Europe-Latin America Co-Production Forum at the San Sebastian Film Festival (Sept 19-27).

The Locarno winners were:

The San Sebastian winners were: