Boost virtual production in film and TV for growth and sustainability, urge experts 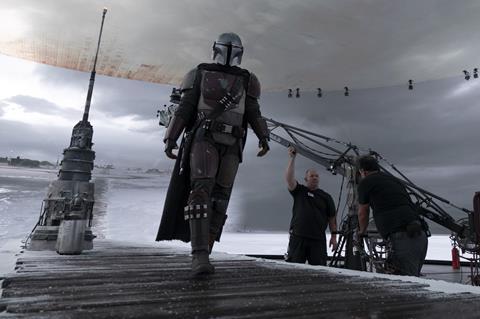 Virtual production on ‘The Mandalorian’

The Covid-19 pandemic has acclerated the technology-led transition towards virtual production in film and television and can help create more jobs and and better sustainability, said a panel of experts at the BFI London Film Festival (LFF) this weekend.

“Doing the entire thing through Covid times has allowed us to create an eight-part series which is set in multiple locations, on the water and around different landscapes, all within one environment,” he explained. “It would not have been feasible to make that show in a traditional way without a volume.”

Techniques such as motion capture have enabled production teams to use actors in different locations, placing them in responsive virtual worlds where live images can be transplanted into computer-generated environments on one screen.

Merging different industry methods, such as combining game-engine software with LED volume screens – the space built into a set where motion capture and compositing takes place – can achieve real-time graphics and pre-visualise a final shot for film and TV.

“We wanted to create a place that was an opportunity for better creative outcome and find and make that available to as many productions as possible,”: he said. “When we designed it, we wanted to make it as big as possible and as flexible as possible.”

Warner Media is partnering with the National Film and Television School (NFTS) to run a new course in virtual production.  The course will address the current shortage of crew who know how to handle the technology.

“We’re not experts either,” said Beagan. “In many cases, we’re doing it the first or second time, and that makes you an expert at this point.”

Lisa Gray, a TV executive producer working with UK virtual production specialist Bild Studios, pointed to the role of skills and training bodies such as the UK’s ScreenSkills.

“Keep an eye out for those kind of organisations, because I think they’re the ones that we’re leaning on to try and get talent coming, but also try to make the access point not as high as it seems to be.”

The speakers on the panel title ‘The Creative Pivot: How Virtual Production Is Changing the Game for Everyone’, discussed the impact virtual production can have on sustainability.

Gray said a typical studio tentpole feature will produce 2,800 tonnes of CO2. “With virtual production, you have the opportunity not to have to travel to as many locations. You don’t have those diesel generators on locations you’re sent to.,” she said. “There are obvious benefits on sustainability that absolutely should be considered now.”

Beagan added: “The first and most obvious thing is the size of the set, so if we were to build some of these sets, they would take months to construct. And now a large part of that is produced by people far away on a computer, possibly even at home. And then what we were building inside the stages, in some cases is probably a tenth of what would have to be built if we were to build that thing for real.”

Speaking on diversity in the industry, Whitlam said: “There is definitely on an artist level and visual effects, there are more men than women.

“We do have, on [upcoming Netflix mystery horror series] 1899, our virtual production supervisor and producer are both women. We’re actively leaning for more opportunities to promote within the business. It’s something that we need to look at, and the government needs to look at an education level and a school level. This is a growing industry and there are opportunities there.

VFX supervisor Angus Bickerton added: “With this new technology, this is the opportunity. There are going to be new young talent who are going to embrace these technologies, and this is the way to bring in diversity.”