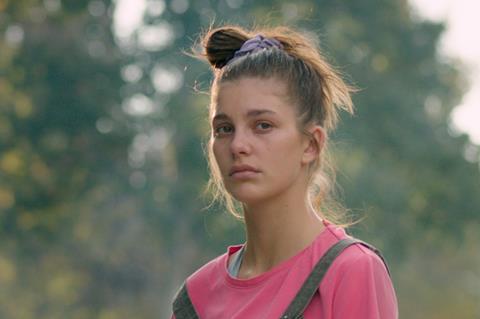 Mickey And The Bear

The Utopia slate kicks off with Actress Annabelle Attanassio’s directorial debut Mickey And The Bear (pictured), which premiered at SXSW earlier this year and stars Camila Morrone as a headstrong teen who must choose between caring for her opioid-addicted veteran father Hank (James Badge Dale) or leaving her Montana home to start her own life.

Shelton’s Sword Of Trust also launched at SXSW and will open in the US through IFC Films. Marc Maron (Glow) and Jillian Bell from Sundance breakout Brittany Runs A Marathon star in the comedic tale of a family heirloom that alt-history conspiracy theorists believe offers proof that the South won the Civil War.

Schwartzman’s (The Unicorn, Dreamland) upcoming feature The Argument stars Dan Fogler from the Fantastic Beasts franchise, Maggie Q, and Emma Bell from The Walking Dead in a comedy about a couple who get into an argument that ruins their cocktail party, only for the guests to decide they should recreate the evening to determine who was right.

Award-winning documentary Fiddlin’ by Julie Simone rounds out the slate, and profiles the rich history, music, and people of the world’s oldest Fiddler’s Convention in the Appalachian Mountains, captured on film for the first time in its 80-year history.

“We’re honored and thrilled to be representing such a remarkable slate of films,” said Utopia head of sales and acquisitions Betesh. “With a range that includes both a celebrated stalwart director like Lynn Shelton and also the absolute brightest of newcomers in Annabelle Attanasio, it’s a slate that we strongly feel constitutes the very best of American independent cinema.”

Schwartzman co-founded the company, which will also launch a technology platform later this year to offer multiple services including a streaming platform.