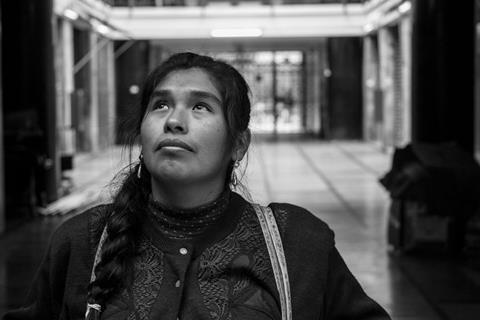 Pamela Mendoza in ‘Song Without A Name’

The Cannes Golden Camera nominee and recent winner of the CineVision Award at the Munich Film Festival will open theatrically towards the end of this year followed by home entertainment and digital release.  Film Movement brokered the deal with Luxbox.

Léon’s feature debut is inspired by events in her country in the 1980s, and centres on Georgina (Pamela Mendoza), a young woman from the Andes whose newborn daughter vanishes after a health check. Georgina enlists the help of journalist Pedro Campos (Tommy Párraga) to investigate.

“Leon artfully brings a little known true story to light in this Kafka-esque thriller,” said Film Movement president Michael Rosenberg. “And though it’s set in the 80s, its subjects – child trafficking, human and indigenous rights, the importance of a free press – are still hot button, ripped-from-the headlines topics in 2019. We’re excited to introduce this exceptionally talented new director to North American audiences in the coming year.”

“It was really important to team with the right partner, Film Movement, to bring to North America the bold and beautiful debut director of Melina Leon,” said Luxbox CEO, sales and acquisitions, Hédi Zardi. “38 years after the publishing of the article revealing the child trafficking, it took almost 9 years for Leon to turn the investigation led by her father into images.

“After a subtle work contextualizing Peru’s political environment in the 80’s, Leon achieved a wonderful tribute to the courage of a woman and the dedication of a journalist to reveal the inescapable truth, raising the strength of this true story to an impressive cinematic film. When art and desire of justice make one, we have one of the most outstanding debut features of this year.”

Leon added, “Our film speaks about a primal fear, what would you do if your newly born was kidnapped and nobody is there to help you find it? Cancion Sin Nombre speaks about a nightmarish country that not only allows such a crime but promotes it. I think this will touch everyone.“