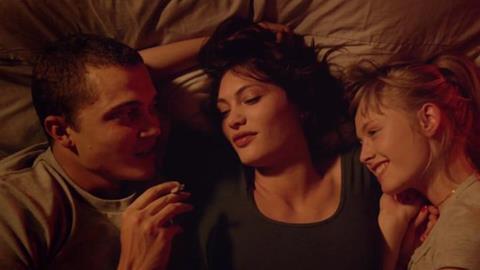 Wild Bunch has secured a slew of sales on Gaspar Noé’s steamy 3D Love, which rocked the Cannes Film Festival’s Palais du Cinema in the early hours of this morning (May 21).

One of the hottest red carpet tickets on the Croisette this week, Noé’s take on the intoxicating nature of love premiered in a packed out screening at the Grand Théâtre Lumière in a Midnight Screening.

Its sexually explicit content, which might pose a problem in a handful of territories such as the US, does not appeared to have deterred buyers, although whether they opt for the X-rated version of the artwork remains to be seen.

As previously announced, it has also been picked up by Curzon Artificial Eye for the UK and Wild Bunch Distribution is set to release the film in France this July.

In Asia, it has been acquired for South Korea (Pancinema), Hong Kong (Edko), Taiwan (Moviecloud) and Japan (Comstock).

As previously announced the Alchemy has picked the film up for the US.