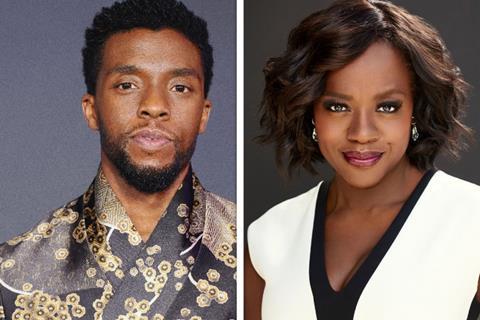 It is the first time two actors from the same film have been honoured by the IFP Gotham Awards.

The 30th anniversary awards show on January 11, 2021, will be presented from Cipriani Wall Street New York in a hybrid format with virtual interactive tables in accordance with Covid-19 protocols.

Boseman died of cancer in August and gave his final performance in George C. Wolfe’s adaptation of the August Wilson play about a recording sesison in 1927 Chicago. The feature will debut on Netflix on December 18.

His credits included Black Panther, Da 5 Bloods, Marshall, Get On Up, and 42.

Davis won an Oscar for her role in Wilson adaptation Fences, and has starred in The Help, Doubt, and TV hit How To Get Away With Murder.

“Chadwick Boseman was an incredibly talented actor whose significance and impact onscreen and kindness off-screen will never be forgotten,” said IFP executive director Jeffrey Sharp. “We at IFP are forever indebted to him for all of his contributions to our organisation, his legacy in providing mentorship and we are proud to honour him and all of his historical and ground-breaking contributions with this tribute.”

Sharp added that Davis was “a force within the industry, acting in some of the most culturally impactful and influential films of the past two decades”.

Additional tributes will be announced for the 2020 IFP Gotham Awards in the coming weeks.