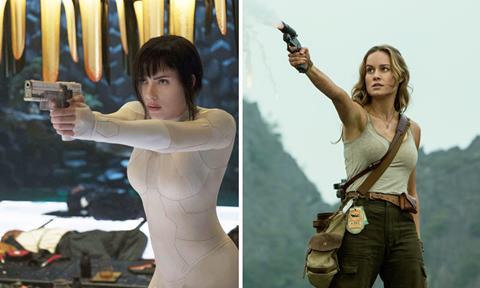 Thanks to the Qing Ming holidays, last week’s Chinese box office (Apr 3-9) surged by approximately 14% week-on-week. The holidays, which fell on Monday and Tuesday, helped propel the box office with its two-day box office better than Saturday and Sunday combined.

Ghost In The Shell, one of two new films that entered the weekly charts, ruled the Friday-Sunday weekend with $21.27m, but it failed to dethrone Kong: Skull Island from the overall top spot. Starring Scarlett Johansson, Paramount’s live-action adaptation of the popular anime, still earned more than its North American opening weekend.

Chinese action crime thriller Extraordinary Mission dropped one place to the fourth with $11.74m for $20.41m after 10 days, while actress-turned-director Xu Jinglei’s local thriller The Missing took $6.37m for $12.86m after 10 days.

The Fate Of The Furious is scheduled for Apr 14, along with A Nail Clippers Romance and Love Is Frozen. The re-release of A Chinese Odyssey Part 2: Cinderella is on April 13.