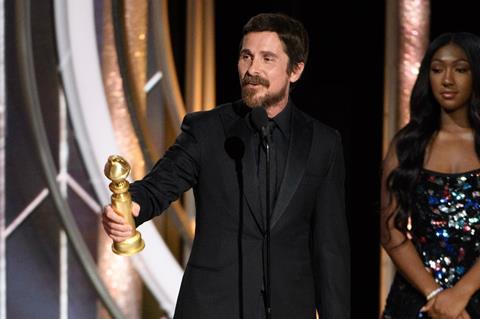 The typical mix of heartfelt and whimsical defined acceptance speeches at Sunday’s (Jan 6) 76th Golden Globes ceremony in Los Angeles – yet Christian Bale’s words will stand out as perhaps the most bizarre.

Bale, the British star of Annapurna Pictures’ Vice, took to the stage to collect his award for best actor in a comedy or musical in recognition of his portrayal of former US vice president Dick Cheney.

“Thank you to Satan for giving me inspiration on how to play this role,” said Bale, clearly relishing the occasion as he drew a big laugh at the Beverly Hilton Hotel.

Earlier he said, “Thank you to that geezer over there, Adam [McKay, director]. He said, ‘I’ve got to find somebody who can be absolutely charisma-free and reviled by everybody,’ so he went, ‘That’s got to be Bale.’”

Warming to his theme, Bale turned his sights on the current US Senate majority leader and said, “For all the competition, I will be cornering the market on charisma-free assholes. What do you think – Mitch McConnell next? That’s got be good.”

Bale won a best supporting Golden Globe in 2011 for David O Russell’s The Fighter, and has been nominated four times in total, including nods for McKay’s The Big Short in 2016, and for Russell’s American Hustle in 2014.