Christopher Walken says he fell into acting 'by accident' 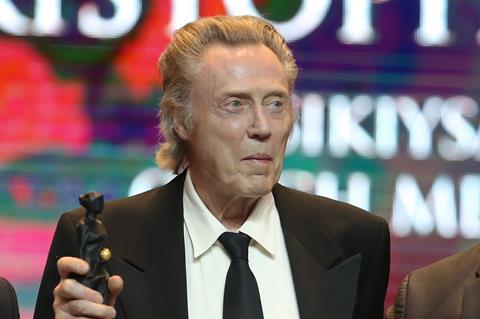 Veteran actor Christopher Walken revealed in a masterclass at Turkey’s Antalya International Film Festival on Sunday that he fell into acting and cinema “by accident” after his ambitious Glasgow-born mother put him on the stage in New York as child.

“My mother was a smitten by show business. She wanted to be in show business, but she came to America from Europe and wasn’t possible. But she had three sons and she took them into show business and television which was getting started in New York,” said Walken.

“Everything was live. There were no video tapes. There were 90 TV shows out of New York every week. All of them were live. And they used a lot of kids and I was one of them.”

The Deer Hunter star explained that like many boys of his generation in New York at the time, he took tap dance classes, which also aided his move into the vibrant musical scene of the 1950s.

“It was very typical, instead of going to play baseball or learn to play the piano. The kids learned to dance and as I got older, I did that for a living.”

“I was a dancer. I got out of high school and I began to work in musical theatre in New York and did touring… I did things like West Side Story. I got a job in a play, I did some other plays and then someone gave me a job in a movie.  I became an actor by accident.”

“I was very lucky. It was with Sean Connery and lots of good New York actors. I had a very small part. It was called ‘the kid’,”

After this brief taste of working in cinema, Walken did not get another big screen break for another five years, he revealed, but his theatre background sustained him during this time.

“I went back to the theatre. I worked in regional theatre in various places, in Canada… I just kept working and I was also unemployed a lot… They didn’t want me. That’s show business. Actors, even successful actors, don’t work very much. Most of the time, they just sit and wait.”

“I always had the theatre to go back to which is very good. Whenever I was waiting, I would go back to New York and would be in a play and be in a small theatre. New York has a lot of very small theatres and I was always busy. I belonged to the Actors Studio so I would go there and work. I would stay busy.”

Cinema work finally did pick up again in the late 1970s with small parts in Michael Winner’s The Sentinel, Woody Allen’s Annie Hall and finally his breakthrough role as Nick in the late Michael Cimino’s The Deer Hunter for which he won an Academy Award in the best actor in a supporting role category.

“There are certain things in one’s career whether you’re an actor or whatever you do, there are moments when something good happens. For me, The Deer Hunter, was the moment when, the Academy Award and so on, I started to get better parts. People noticed me, they knew my name, I started to make more money. Things changed a lot with The Deer Hunter,” he said.

Walken would go on to work with Cimino again in his financially disastrous production Heaven’s Gate, playing the lead role of real-life 19th century, independent rancher Nathan D. Champion who challenged the unfair practices of the large corporate-style ranches.

The actor was philosophical about the fate of the film which buried Cimino’s Hollywood career after it grossed just $3.5m in the US on a $44m budget.

“I loved Michael Cimino… We did The Deer Hunter. It was very successful and we went to many places and festivals and so on. And then we did Heaven’s Gate which was also an amazing experience but of course it was, was… what’s the word… it didn’t work out so well. But I think over time it’s proven to be a more interesting movie than it’s given credit for.”

Quizzed on how he gets into character for his many different roles, Walken revealed a straightforward approach.

“I have a theory that it doesn’t matter what you are playing whether you are playing the King of France or Frank White,” he said, referring to the lead character in Abel Ferrara’s King Of New York which was given a special screening in Antalya. “Or somebody…anything. If the story says that you are that, you don’t have to do anything. You just be that person. The audience will believe you until you do something that makes them not believe you.”