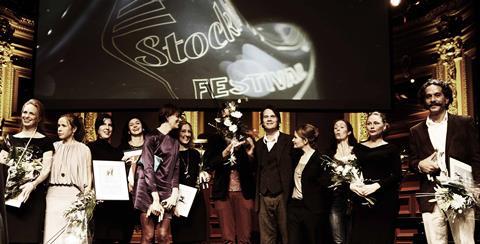 UK film The Selfish Giant has picked up the Bronze Horse for best film at the 24th Stockholm Film Festival (Nov 6-17).

It marks the second consecutive year a film by a female director has won the top prize at Stockholm, after Cate Shortland’s Lore picked up the award last year.

The film, about two young friends who gather scrap metal for cash, was described by the jury as “a uniquely complete film. Shattering, to the point, poetic, believable, delicate, humorous. The sensitive interaction between the two main actors has resulted in the most touching portrayal of friendship we’ve seen in film. Only someone hard-hearted could fail to love this film.”

The Selfish Giant, which debuted at Cannes, is represented by Protagonist Pictures and produced by Moonspun Films, with the backing of the BFI and Film4. Sundance Selects will distribute in the US.

A special mention went to Steve McQueen’s 12 Years a Slave, which opened the festival.

The debut of US director Ryan Coogler, Fruitvale Station, won best first film adding to awards won at Sundance and Cannes. Released by The Weinstein Company, it is based on the tragic true story of Oscar Grant (Michael B. Jordan), a 22-year-old who was shot by a police officer on New Year’s Day 2009.

George MacKay, a Screen Star of Tomorrow in 2012, picked up the best actor prize for his role in UK film For Those In Peril.

Jasmine Trinca won best actress for her performance in Miele.

The film takes place in a contemporary New York apartment in which the actors play heightened versions of themselves. Alexandra Dahlström (as Miss Julie) and Jens Lekman (as Jean) meet to reenact the play to Lekmans’ music.

Scripted by Josefine Adolfsson and Fia-Stina Sandlund, it is produced by Tobias Janson and made by production company Story AB.

The 24th SIFF includes more than 180 films from more than 50 countries and will close tonight with Stepehn Frears’ Philomena.

A uniquely complete film. Shattering, to the point, poetic, believable, delicate, humorous. The sensitive interaction between the two main actors has resulted in the most touching portrayal of friendship we’ve seen in film. Only someone hard-hearted could fail to love this film.

This film presents a captivating slice-of-life, or maybe rather a slice-of-death, portrayal of the taking of someone’s life. The abhorrent, meaningless murder is captured sensitively and sincerely in this energetic film. It’s both a brutal eye-opener and a masterful cinematic achievement. A harsh reminder of the impact slavery has left on our contemporary society. This impressive debut is a must for everyone to see!

Sparse, precise, engaging. A relentless story about a family’s disintegration is depicted with complete lack of sentimentality. This script is very exact – following the story is like opening a watch and marvelling at the delicate mechanics within. All aspects of the story work together to drive this moving and unusual story forward.

Best Actor
George Mackay in For Those in Peril

Very finely acted, and with small nuances, this actor expresses what it is like to be forced to the outer limits of human pain and sorrow. His complete vulnerability, isolation and despair are just as frightening for us as viewers as for his character and is very accurately portrayed.

An unexpected presentation of a very unusual character who arouses great curiosity with her very subjective yet distanced demeanour. The acting is spellbinding despite the underplayed style. We are dragged into her world but left guessing as to what really motivates her. The transparency of her expression as she presides over people’s last living moments etches itself into ones subconscious making the viewer live through these experiences as if they were their own.

The film’s photography lifts the story at the same time undermining both the landscape and the events taking place guiding the viewer along previously unexplored paths. The camera forces us to visit places we have never been, and which we maybe wish we had been spared. However provocative the images are they achieve an unexpected beauty, and come together to create a shattering and comprehensive film.

Hans Zimmer has mastered the style of classic musical storytelling. He combines the almost frighteningly epic with the sensitively delicate: from hand claps to symphony. He is daring, and it pays off.

Although it was the shortest film, as well as the only animated one in the competition, we found it to combine all the elements of cinema. It’s well executed, efficient and quietly moving. It uses a textual, three-dimensional technique that we’ve never really seen before in this way. It’s beauty is in it’s simplicity, and the film feels mature and fully formed as a result.

With an impressive attention to detail and an easy, unaffected storytelling, Calin Peter Netzer describes how maternal love’s darker sides and a son’s hopelessly failed emancipation are amplified by a terrible tragedy. With a delicate hand he highlights the characters and lets them grow into three dimensional portraits in a sincere and genuine drama where the turning point is allowed to take place inside the viewer as much as on the silver screen.

This year’s Rising Star is an actor who has already made a lasting impression on screen despite his young age. With great precision and understanding of the craft he portrays a wide range of emotions, from playfulness and humour to vibrating love and deep pain. All these qualities were also present in his most recent film, the critically acclaimed “Känn ingen sorg”.

A post-modern, metafictional, slightly absurd re-make of Strindberg’s Miss Julie (Fröken Julie). The film takes place in a contemporary New York apartment in which the actors play heightened versions of themselves. Alexandra Dahlström (as Miss Julie) and Jens Lekman (as Jean) meet to reenact the play to Lekmans’ music.

Claire Denis refuses to close her eyes to the creative and destructive force unleashed by human weaknesses. A bold explorer of postcolonial Africa and the dark corners of modern society, who invites the audience to an exposed universe that is beautiful and raw. This year’s Lifetime Achievement Award goes to a filmmaker who continues to seek what others turn away from, always fearless and with a rare eye for visual poetry.

Whether men are drowning by numbers, bodies are turned into art or savage nature is transformed into haute cuisine, Peter Greenaway has always challenged the spectator like a true modern visionary. By questioning traditional notions of artistic expression and combining the latest techniques with his vast knowledge of the classic art forms, this year’s recipient of the Stockholm Visionary Award has indeed created a new cinematic language.

This award goes to a director who is in complete control of his chosen mode of expression. The film succeeds at being at the same time both epic and personal. All too often a director can overshadow their own film, but here is someone whose presence doesn’t force itself onto the film, but which still shines through in each editorial choice he has made. Quite apart from the beautiful craftsmanship, this film is uniquely courageous. The unexpected duration of certain close-ups never feels self-serving, as each shot contributes to the film as a whole creating the unique feeling and aura of 12 Years a Slave.

Bold, courageos, funny, provocative. The Reunion is a well-crafted story, and navigates a mix of genres intelligently. We find ourselves in a labyrinth of mirrors where the viewer is confronted with questions about power, loneliness and bullying at every turn. The film does not present any answers, but leaves one with a lot of rewarding questions. This is a film with strong artistic integrity.

For evocative and compelling cinematic portraits that move through time and space, combining the countryside’s innocence with the feeling of an ominous external world. With an enigmatic and highly personal narrative, the director recurs to the subjectivity of the memory in a society destined for change.

For an ambitious, challenging and brave project without compromise.